The University of Victoria Vikes men’s basketball team had a lights out opening quarter to propel them to a 91-75 win over the UBC Okanagan Heat in Kelowna on Jan. 25. The win lifts the Vikes to 7-10 and provided the much-needed bounce back following last weekend’s losses to Lethbridge.

Fifth-year Vike Jake Newman put up career numbers with a 27-point performance that paired well with a team-high 12 rebounds. Former Canada West Rookie of the Year Scott Kellum put on another showcase of his outside shooting going 6-for-11 from distance to finish the night with 22 points. Senior Vike Jordan Charles added 11 points, while fifth-year mason Loewen returned to the fold after a few weeks of injury to contribute 14 points, six rebounds and four assists.

UBC Okanagan were led in scoring by fifth-year guard Aldrich Berrios who had 26 points and five assists. Fellow starter Triston Matthews had 19 points, while Jarrett Larsen came off the bench to add 18 points.

The Vikes came out hot in the first half as Kellum dropped four treys, while Newman added one of his own. It seemed like every Vike was finding the hoop as Newman, Jordan Charles, Graeme Hyde-Lay continued to see their shots fall, enough to grab a 10 point lead. The Vikes entered the second up 28-18.

In the second quarter, Berrios continued to provide the response for the home side, while Matthews’ outside shooting checked the Heat within eight, down 34-26, mid-way through the quarter. Kellum saw two more three-pointers drop to help the visitors to a 49-30 lead at half time.

In the third quarter the Heat stepped it up to be out-scored only by three points, 19-16. Matthews had seven points to help the Heat out but the Vikes were able to keep their lead, up 68-46, heading into the final frame.

In the final minutes of the game the Heat continued to push back. Tyler Jardine made a three with under two minutes to go but a quick foul on the next possession sent Loewen to the charity stripe where he made no mistakes. The Vikes were 67 per cent in their free-throw shooting, while they were at 49 for field goal percentage. 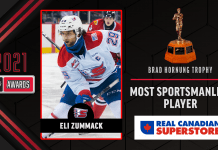