VICTORIA – The University of Victoria Vikes women’s basketball team could not hang on for four quarters, as in similar fashion to a night earlier, conceded a devastating second half to end their season at the hands of the No. 6-ranked Regina Cougars on Feb. 15. A second-straight powering second half gave the Cougars the 80-61 victory at home and Regina now advances to the Canada West semifinals, while the Vikes will celebrate an outstanding five seasons from fifth-year guard Amira Giannattasio and four seasons from forward Paige Thomson.

Despite the loss the Vikes can celebrate performances from non-seniors as a foreshadow for the coming years. Third year Aleah Ashlee put the team on her back for 20 points and seven rebounds, while Giannattasio was held to 10 points. Credit to the Cougars defence who had Giannattasio often double teamed leaving the Vikes to look elsewhere for scoring. Second year Ashlyn Day provided nine points and six rebounds, while Calli McMillan, Haily Weaver and Katie Langdon each had six points.

For Regina it was undisputedly thanks to the workhorse efforts of guard Kyanna Giles. The Winnipeg native had a double-double of 18 points and 10 rebounds and was on top of every play. Macaela Crone had the game’s only other double-double with 12 points and 10 rebounds, while Christina McCusker had 12 points and six boards. Faith Reid came off the pine to provide two key three pointers to finish with 10 points on the night.

In the opening quarter the Vikes edged the Cougars 19-17 as Giles’s final drive of the quarter cut the difference to one possession. Vikes forward Weaver led her side with six points as Giannattasio was held to an uncharacteristic five points while picking up two fouls early. The Vikes struggled with their offensive boards and getting second-chance points but did well defensively to deny the Cougars easy looks at the basket.

The Vikes did well without Giannattasio at the start of the quarter as Langdon, McMillan and Weaver moved the ball well. Ashlee got the ball on the perimeter and drove in, pulled up and sank a nice jumper to lift the Vikes 24-22 after McCusker’s pocket of free throws had the game tied at 21 just moments before. Regina’s Reid hit a big three to restore the lead to the home side, up 26-24. Ashlee responded for the Vikes to tie the game up again at 26, after taking advantage of a well-run set piece. Reid dropped another daggering and deep three with just under three minutes to lift the Cougars 31-26. Giannattasio put up a high arching and long two with just over a minute in the half to get the Vikes back within three, down 33-30, which is what remained by half time.

The third quarter started rough as Giannattasio was dealt her third foul early and on the next play Crone was the beneficiary of a well-executed run down the floor to lift Regina 37-30. McMillan fed an inbound straight to Day, who dropped a distant two to get the Vikes back within five, down 39-34. Ashlee and Day were the only real scoring contributors for the Vikes, while Giles continued to be a threat both defensively and offensively. In an almost repeat of yesterday the Vikes crumbled in the third. Angela Bongomin was outstanding in the post to propel the Cougars to out-score the Vikes 22-10 en route to a 55-40 lead heading into the fourth.

Things didn’t look up in the final quarter as Giles dropped a three to give the Cougars a 62-43 as the third year continued to be outstanding at both ends of the floor. It was an uphill battle for the Vikes as McMillan and Giannattasio were in foul trouble, while the Cougars continued to see the ball fall, extending their lead to 70-45 mid-way through the fourth.

Ashlee continued to keep the Vikes in it dropping a three with three minutes to go to salvage the Vikes some points, trailing 77-54. The Vikes could not hang on as things just seemed to spiral downward and the Cougars continued to propel their advantage all the way to an 81-60 commanding victory.

The win advances the Cougars to the Canada West semifinals, while the loss ends the season for the Vikes, who returned to the quarter-finals for the sixth straight season. 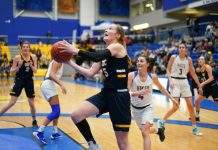 Vikes unable to contain Cougars in second half, drop game one of quarterfinal series