Argentina started the match off strong, blocking a clearing attempt and scooping up the ball of an early try. Ciaran Hearn kicked two for three penalty kicks in the first half. Argentina scored a try just before the end of the first to lead Canada 22-6 at the break.

An exciting second half was fueled by the cheers from a sold out Westhills Stadium crowd. Canada was finally rewarded after multiple crashing phases with a try by Kyle Baillie. Working off momentum, Andrew Coe got on his horse to beat the Argentinean defense and sprint down the right side, sliding in for the try. A second try by Coe was called off due to a forward pass just a few minutes later.

Argentina XV were awarded a penalty try that secured their win just before the final whistle. With the bonus point they won the 2019 ARC. 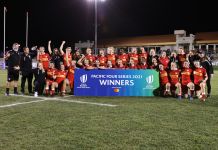