The captains of the 16 teams competing at the HSBC Singapore Rugby Sevens gathered in the Cloud Forest at the Gardens by the Bay complex ahead of the eighth round of the HSBC World Rugby Sevens Series.

For the captains of USA, Fiji and New Zealand there is the added incentive of the chance to secure qualification to the Tokyo 2020 Olympic Games this weekend in Singapore, where the action takes place at the National Stadium on 13 and 14 April.

The USA arrive in Singapore top of the series standings following an impressively consistent run of results which has seen them on the medal podium in six of the seven rounds so far, including victory on home soil in Las Vegas.

USA Captain Madison Hughes said: “We’ve got lots of confidence. We’ve just been going tournament by tournament and doing as well as we can each time. It’s another tough pool here so we will have to play our best.

Fiji are hot on the heels of the USA in second place and arrive in Singapore on the back of victory in Hong Kong last weekend. Fiji will be aiming to repeat their feat of back-to-back triumphs, which they achieved last year. New Zealand in third and South Africa complete the top four line up in the current standings after seven rounds.

The 2019 series carries special significance as the top four teams will qualify directly for the Tokyo 2020 Olympic Games, and with just 40 points separating the top five teams it is all to play for in the remaining three rounds of the series.

Should any of the top teams finish the Singapore event with a margin of 43 or more points ahead of the fifth placed team in the standings – currently England – they will have achieved Olympic qualification for Tokyo 2020 with two rounds to spare.

England are currently in fifth position and captain Tom Mitchell said: “Our expectation here in Singapore is to try and build on our performance in Hong Kong. It is exciting times now moving into the last three rounds of the series and we want to keep improving and keep delivering good performances.

“We are sat in fifth position at the moment with South Africa just ahead of us in fourth, the position which would enable us to qualify for the Olympics on behalf of Team GB. With three rounds to go the opportunities are there for us and were excited about the challenge, but we know it’s not an easy one. We’re going to do all we can do and see what happens by the end of the season.”

At the bottom end of the series standings the competition is equally intense as Wales, Japan and Kenya battle to avoid relegation with only three points separating the bottom three teams.

Kenya Captain Jeffrey Oluoch said: “I’m looking forward to this weekend’s competition and hope it is going to be a great one for us. We are currently 13th in the table and close to the other teams so we need to bag maximum points as much as we can this weekend and we’re aiming for the quarter-finals to stretch the margin from the other teams. There is a lot of excitement in the camp, training has been good, the boys are psyched up and have high hopes for this weekend.”

The relegated team will be replaced by Ireland who secured their place on next year’s series in style by comprehensively winning the qualifier event in Hong Kong last weekend. The beaten qualifier finalists Hong Kong are the invitational team in Singapore.

The pool draw for Hong Kong sees reigning Singapore title holders Fiji face South Africa, Scotland and Canada in Pool A. In Pool B, France will be looking to continue their fine form following two consecutive cup final appearances and are up against Argentina, Australia and Hong Kong. Pool C sees series leaders USA take on England, Kenya and Wales, while in Pool D third placed New Zealand are drawn with Samoa, Japan and Spain.

The action gets under way at the National Stadium in Singapore on Saturday at 10:00 local time (GMT+8). 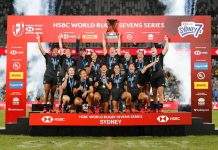