The 2019 NAIA Women’s Golf Championship got underway on May 14 at Lincoln Park Golf Course’s West Courts in Oklahoma City, Oklahoma, and the University of Victoria Vikes will have a lot of catching up to do. Hosts Oklahoma City University (OCU) are in the lead, while the Vikes are tied for 19th in the team standings after shooting a collective 316 after the opening of four rounds over four days.

OCU shot a 1-under par team total of 287, and hold a six-shot lead after the first round of play. Melissa Eldridge blistered the course to the tune of a 5-under par 67, the only sub-70 score of the day. She holds a two shot lead over Papatsara Niamrungrueang of William Carey University (Miss.) and Maria Zrodowska of William Woods University (Mo.). For the Vikes, fourth year Nicole Gargarella was by far the team’s top performer. The Etobicoke, Ont. native was highlighted on opening day for her hole-in-one performance. Gargarella grabbed a 5-hybrid on the tee of the 144-yard par-3 12th hole, her third hole of the day, and ran her tee shot into the cup for an ace on her way to a round of 72. Gargarella is the lone Vike in the top running of the individual standings, sitting tied for sixth overall, after carding par on 12 holes along side a birdie, ace and three bogies. 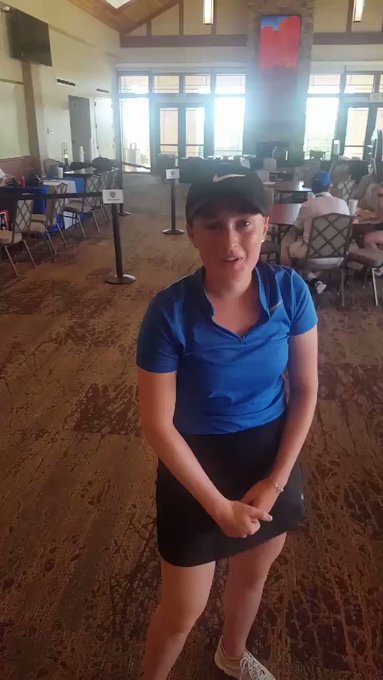 First year Sukriti Harjai shot a 79 to open her first National Championship appearance to be the second lowest shooting Vike of the day. Following Harjai was Rhiannon Jones (82), Melanie Murchison (83) and Quinn Fitzgerald (83). The Vikes are tied with Southeastern University FL for 19th spot, while their Canadian and mainland rivals UBC are comfortably in third spot.

“The women struggled a bit as a team after a decent start early in their round,” described Vikes head coach Justin Clews. “We did have a great score out of Nicole today, who shot even par, and that was certainly highlighted by her ace on her third hole of the day. It was only fitting for her to get the rare ace in her senior year as a Vike.”

“Sukriti also played really steady today breaking 80. The girls should bounce back tomorrow as a team and move up the leaderboard. They will tee off in the afternoon wave of tee times and as long as they don’t watch the leaderboard and just stick to their routines, they will do just fine.” UBC’s Avril Li is tied for fourth after shooting 71, while team mates Esther Lee (73), Kate Johnston (75), and Shania Remandaban (75) helped the T-Birds sit one stroke back of second-placed Dalton State.

The second round will get underway on May 15 morning at 7:30 a.m. when the first of Tuesday’s afternoon groups will tee off in the morning. The pairings will remain the same, with Tuesday’s morning groups playing in the afternoon, and vice versa. The teams will also switch which tee they start from, with teams who started from the first tee on Tuesday starting the second round on the back nine and vice versa. Following the second round, the field will be cut to the top-17 teams and top-40 individuals, including ties in both cases.