Owen Cotito might be described by some as a quick thinker— he’s able to solve the Rubik’s Cube in under a minute.

Cotito links his ability to complete the best selling puzzle to his on-court play by connecting the skill of solving problems quickly and using his hands with speed and precision to find a solution. These are attributes that coach Hudson finds appealing in a setter as he looks at Cotito and his skill set as a unique and exciting prospect.

“To add Owen to this year’s recruiting class is a coup,” says Hudson. “What Owen lacks in experience he makes up for in promise. There’s simply so much potential with him it’s impossible to ignore. There are very few setters in our conference with Owen’s length and athleticism. He moves effortlessly around the court and already has a great feel for the ball.”

“Without question he will be a setter who makes the people around him better,” sums up Hudson.

Academics also played a big role on Cotito’s decision to play his post secondary volleyball in Kelowna. While creating the next great business idea is Cotito’s long-term goal, he plans to enroll in the Faculty of Management and feels earning his degree at UBC Okanagan will kick start that journey.

“Academically, it seems like a great school with a close-knit campus and a great reputation,” adds Cotito. “I decided I wanted to attend UBC Okanagan because I believe that is what will be best for me. Athletically, I want to be at UBC Okanagan because it has a volleyball program full of athletes and coaches that I feel I can learn a ton from.”

Cotito is a multi-sport star with Sa Hali and a continual member of the school’s honour roll. As the starting setter of the Sa-Hali Sabres, he has piloted his team to back-to-back City of Kamloops high school titles in 2017 and 2018.

The KVA (Kamloops Volleyball Association) Pack club team member has also received the school’s major athletic award, the Sabres Super Block Award. He has also been a contributor on his school’s soccer team every year since grade eight, winning two provincial silver medals and a fourth place finish this past fall.

“I am excited to come to UBC Okanagan and compete for the Heat because the potential in the volleyball program seems enormous and the opportunity to be a part of that is amazing,” he adds. “I’m also super excited at the chance to play with and against athletes of such a high calibre.”

Cotito is the fifth high school star to commit to the Heat for next fall. Middle Luke Tiegen and outside hitters, Noah Carlson and Aaron Voth, have also signed on with UBCO for 2019. Lake country libero, Ben Magel, has also recently committed to coach Hudson and the Heat. The Canada West men’s volleyball regular season schedule for these recruits and the rest of the Heat squad will be released on June 12. 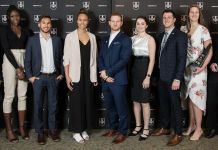