he Victoria HarbourCats Alumni turned back the clock in a 9-7 exhibition victory over the 2019 team of HarbourCats in the first ever Peninsula Co-op Alumni Classic at Royal Athletic Park. 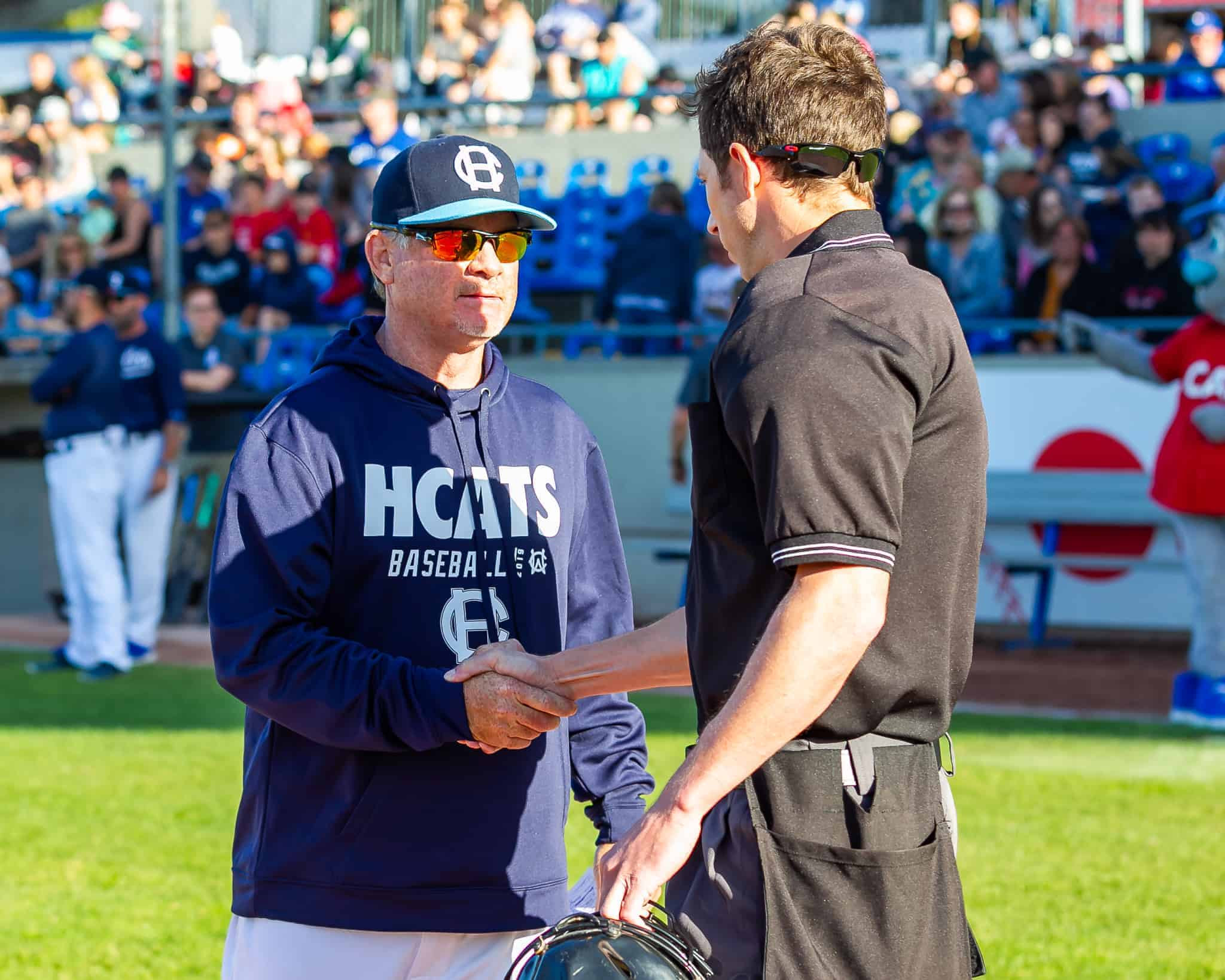 With a team comprised of former all-stars and veterans across the past six seasons of HarbourCats baseball, the Alumni team busted out the wooden bats from their closets and scored early and often. 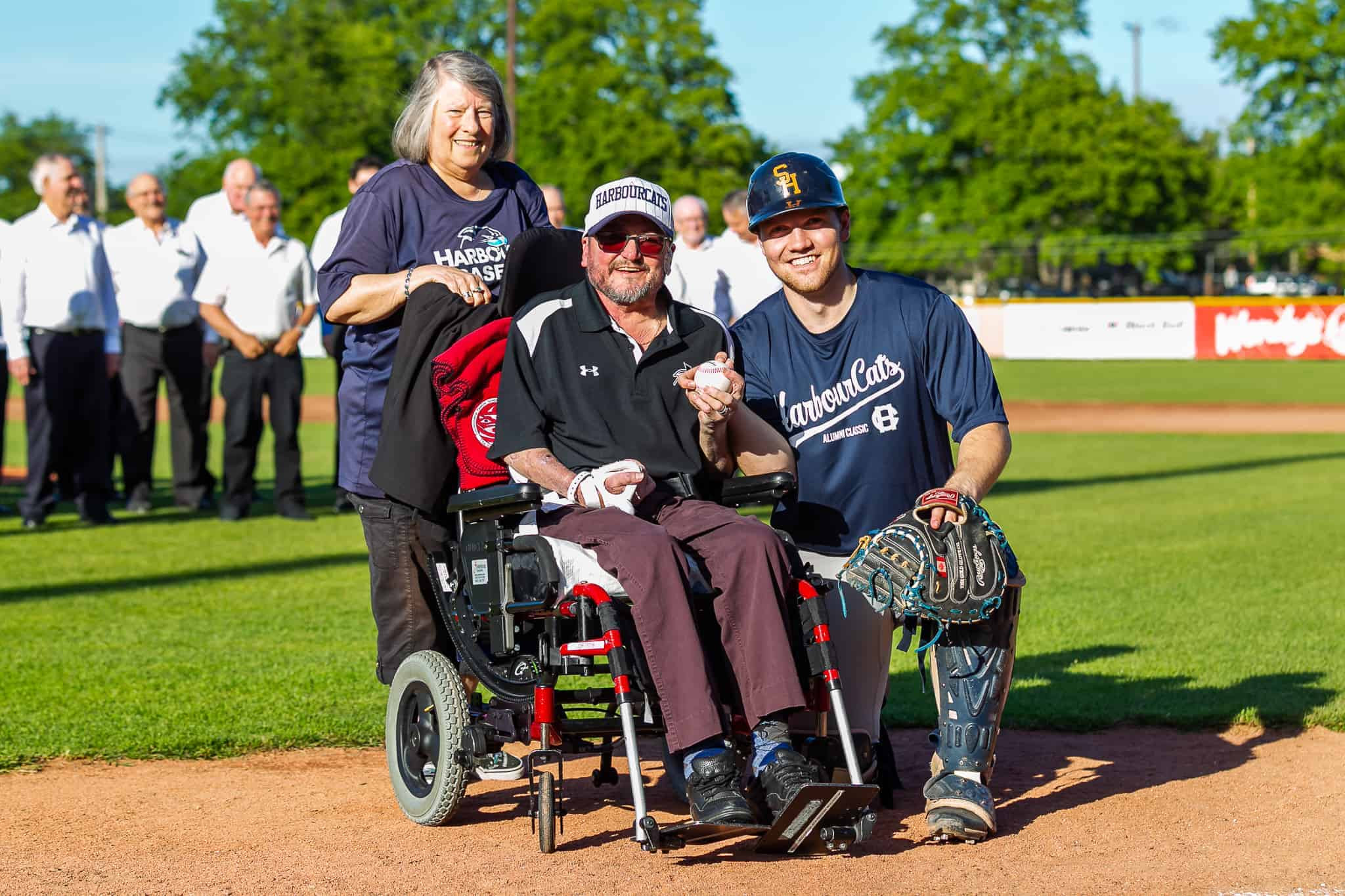 Hayden Jaco, a 2016 and 2018 HarbourCat member, lead the way for the Alumni at the plate with a four singles and two RBI’s, while Nanaimo native Aidan Goodall made it halfway to the cycle with a triple and double in his first two plate appearances.

2013 WCL All-Star, and one of the first HarbourCat signees, Austin Russell flashed his leather in the outfield in his first game back at Wilson’s Group Stadium since Victoria’s inaugural season in 2013.

“It’s an honour to always get out at RAP and play some ball in front of the crowded stands,” said Russell. “We didn’t have much to lose out there, and we stayed loose and had lots of fun.”

The original big bomber of the HarbourCats, and headliner of the Alumni team, Gabe Clark watched his number added to the Victoria ring of honour before the game and added two walks at the dish in his first game on the Island since 2015. 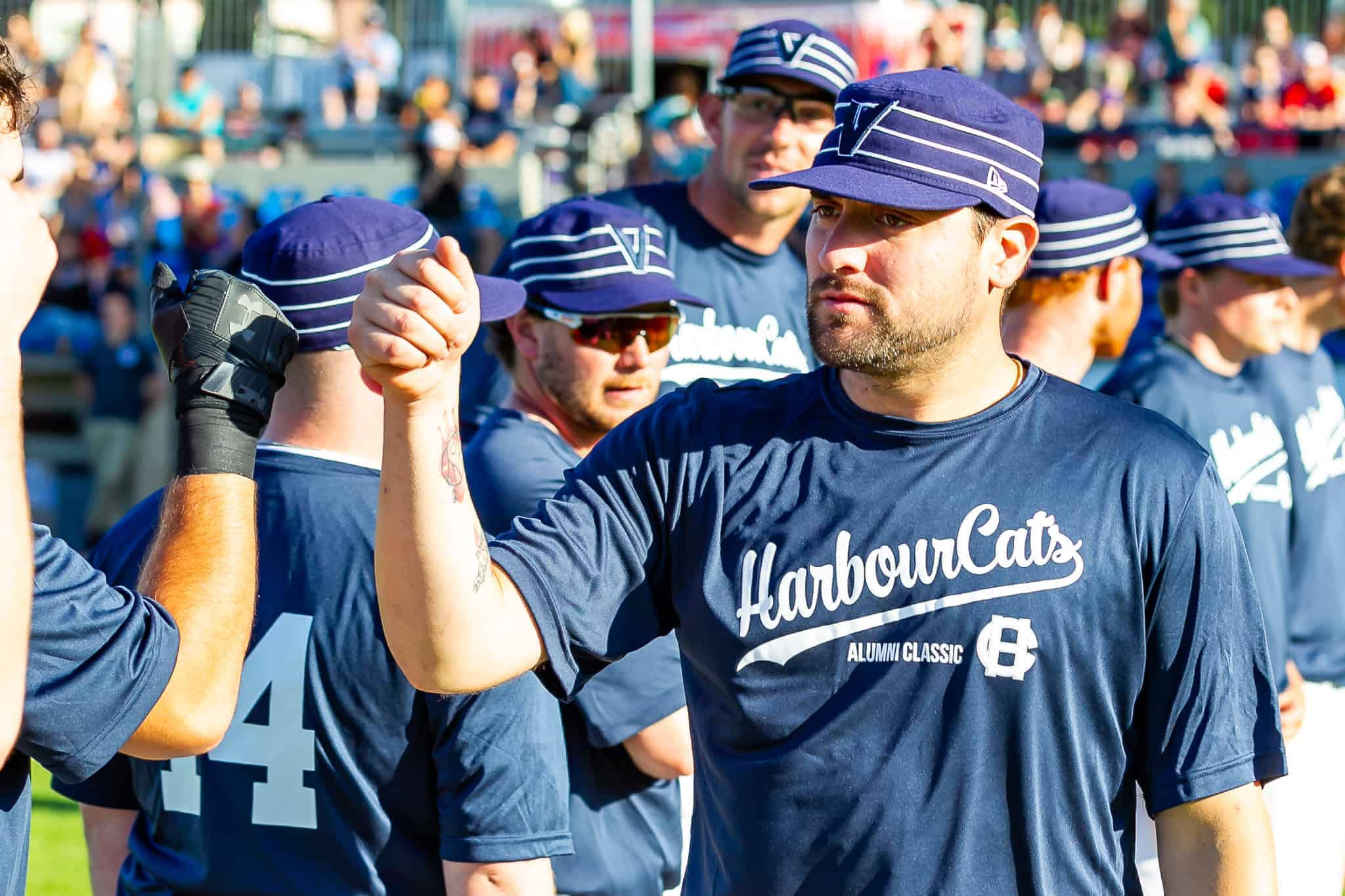 On the mound, southpaw Dylan Thorpe showed the over 1,600 fans in attendance why he was a rock out of the bullpen for the 2017 HarbourCat team that came within a single game of winning the West Coast League title, scattering three hits and a single earned run over three innings of work. 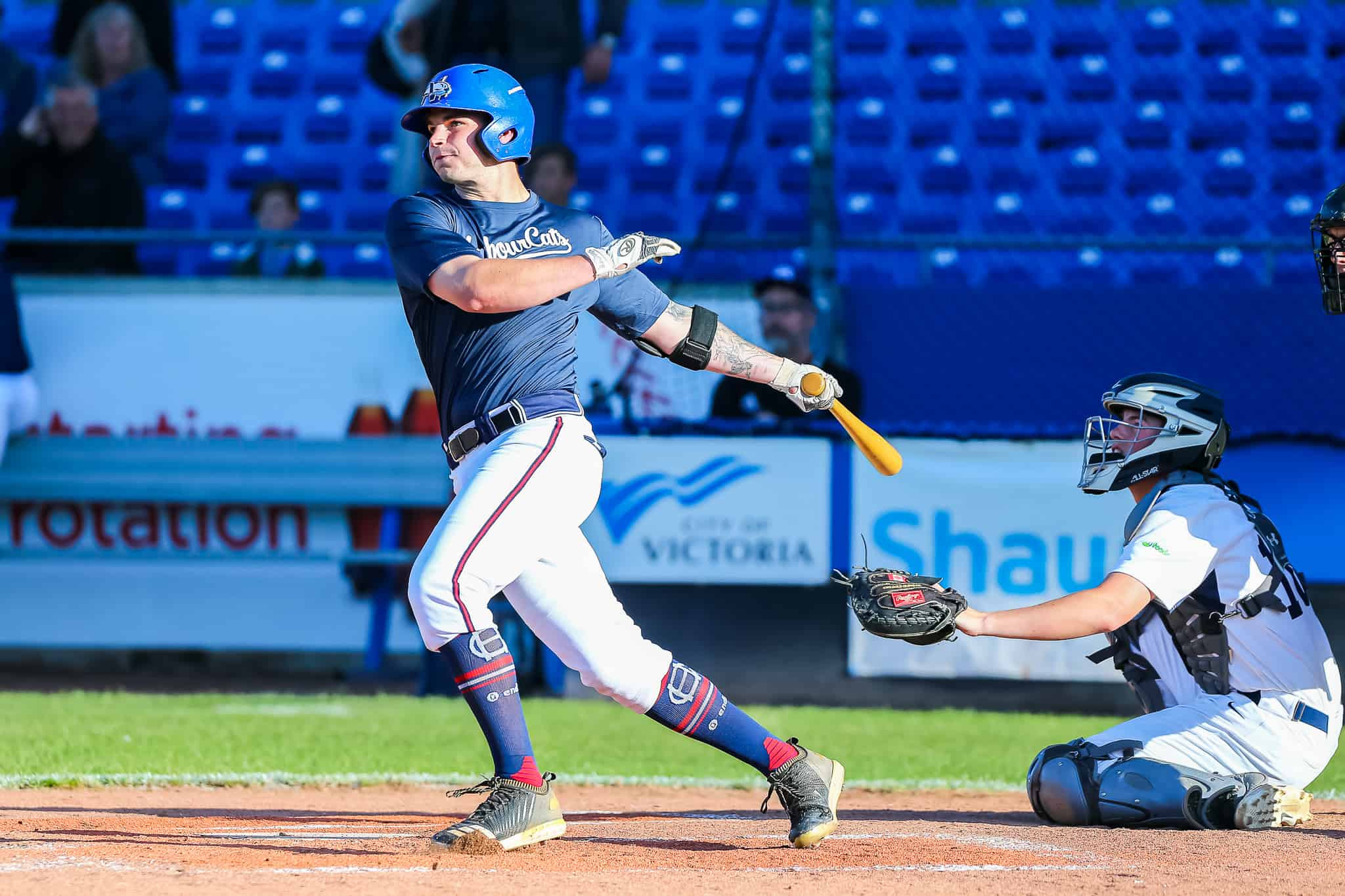 The current group of HarbourCats got on the board in the home half of the second, when Yavapai Junior College’s Nick Adams smacked a triple to the wall in right centre and scored off an Alumni error to make the score 3-1 in his debut at Wilson’s Group Stadium.

In the top of the third, however, the Alumni responded and increased their lead to four after Goodall scored Jaco with a double and scored two batters later courtesy of a HarbourCat wild pitch.

Tyler Ulrich and Spencer Walton hit a pair of RBI singles in the fifth and sixth innings to make it a 6-3 game, but Jaco’s fourth single of the night in the top half of the seventh upped the Alumni lead back up to five.

After the HarbourCats clawed back to within three runs in the eighth, Jaco was summoned on the mound by Alumni Manager Jim Clark and collected the final five outs to close out the game.

“It’s a good crowd [here]… It’s always good to play in front of a crowd, I wish I was playing for the team again and what not,” said Jaco. “But I guess it’s time for the young kids to step up and the crowds are going to get bigger and better.” 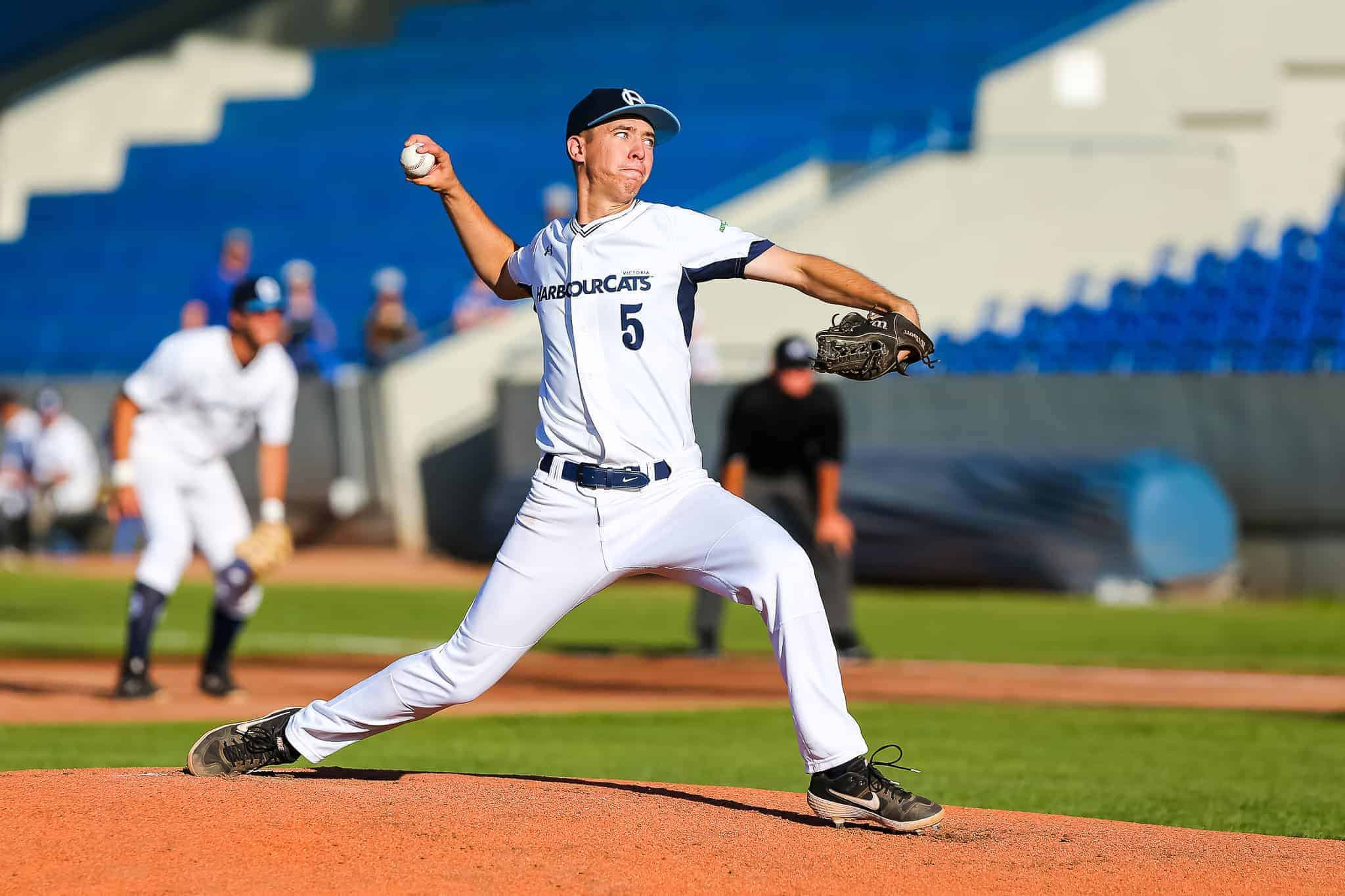 Union de Reyes, a team from the province of Matanzas in Cuba, will open the Greater Victoria Sport Tourism Commission International Series in a historic day game against the Port Angeles Lefties at RAP this afternoon. First pitch is scheduled for 1:00pm, as the Lefties hop across the strait and become the first U.S. based team in the 14-year history of the WCL to play a team from Cuba.

Victoria will then wrap up their preseason schedule in the back half of a doubleheader against Team Cuba tomorrow night, before heading to Wenatchee for the regular season opener next week. First pitch is slated for 6:35pm at RAP.