Ahead of the 2019 WLA trade deadline, the Victoria Shamrocks and Langley Thunder have pulled off a blockbuster deal.

Dinsdale has played in 3 games this season for Maple Ridge picking up 6 goals and 6 assists.  An 8-year NLL veteran, he picked up 20 goals and 27 assists in 18 games this year with the Saskatchewan Rush.

Robinson has been sensational for the Thunder this season as he led the club in scoring. His 17 goals are good for 5thin the WLA while his 41 points are good for 3rdoverall in league scoring. Robinson is also a teammate of Dinsdale with the Saskatchewan Rush in the NLL.

The 1995 born Pace was a member of the NLL Champion Calgary Roughnecks this season. In 17 games with Calgary he posted 17 goals and 25 assists. Pace led the Thunder in scoring in 2018 as had 30 goals and 35 assists for 65 points in 18 games.

The deal brings two first overall WLA picks to the Shamrocks attack.  Robinson was selected first overall in 2018, while Pace was taken in that same spot the season before in 2017.

“We’re sorry to see Keegan and Daniel go, but the opportunity to add three exceptionally talented players to our offence was something we just couldn’t say no to.” Said Shamrocks General Manager Chris Welch. “With the injuries we’ve sustained this year to some key offensive players, we felt we had to make this move to solidify our attack for the remainder of the season.”

The Shamrocks are next in action on Thursday night as they head to Frank Crane Arena in Nanaimo to take on the 6-2-0 Timbermen. 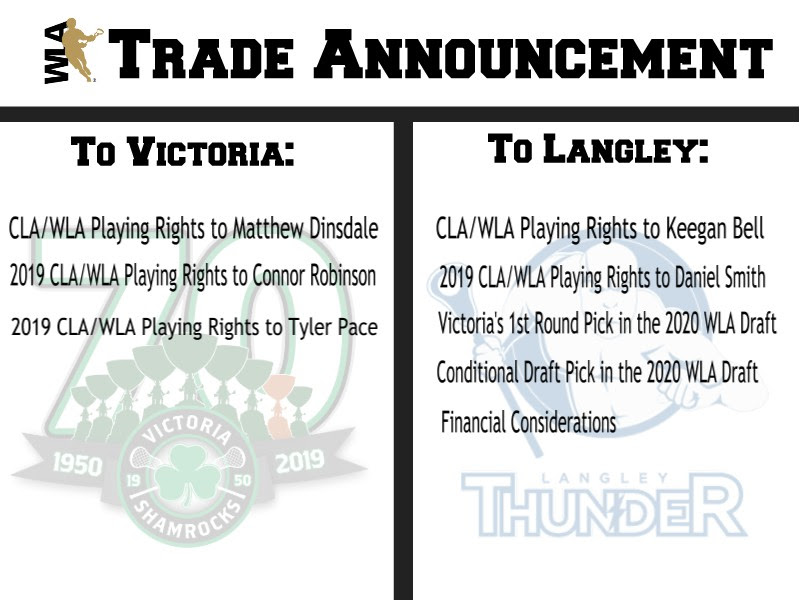