The Provincial Regional Championships (PRCs), sponsored by B2Gold, concluded yesterday after three days of action-packed youth rugby.  The tournament, one of the highlights of the rugby calendar in BC, took place at the Gerald McGavin Rugby Centre at UBC with nearly 50 regional teams vying for glory across six divisions.

There was a wonderful, festival-like atmosphere surrounding the venue over the Canada Day long weekend with scores of passionate supporters cheering on from the touchlines.  Near perfect weather and pristine pitch conditions set the stage for a thoroughly memorable event for all involved.

In total, nearly 1000 players were in attendance over the three days, along with hundreds of committed parents and supporters, dozens of coaching staff, match officials and organisers. Nearly 4000 minutes of competitive rugby were played, showcasing some of the very best Age-Grade rugby talent in the Province. The enthusiasm from the athletes was palpable and they consistently delivered exciting end to end rugby action, much to the delight of onlookers. 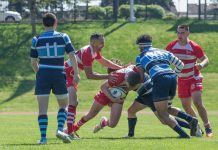