For the third time in four seasons, the Victoria HarbourCats will be in the West Coast League postseason.

It took until the final day of the 27-game first half schedule, but the HarbourCats (18-10) clinched the WCL First Half North division title with an 8-1 victory over the Bellingham Bells on a drizzly Sunday afternoon at Wilson’s Group Stadium at Royal Athletic Park. 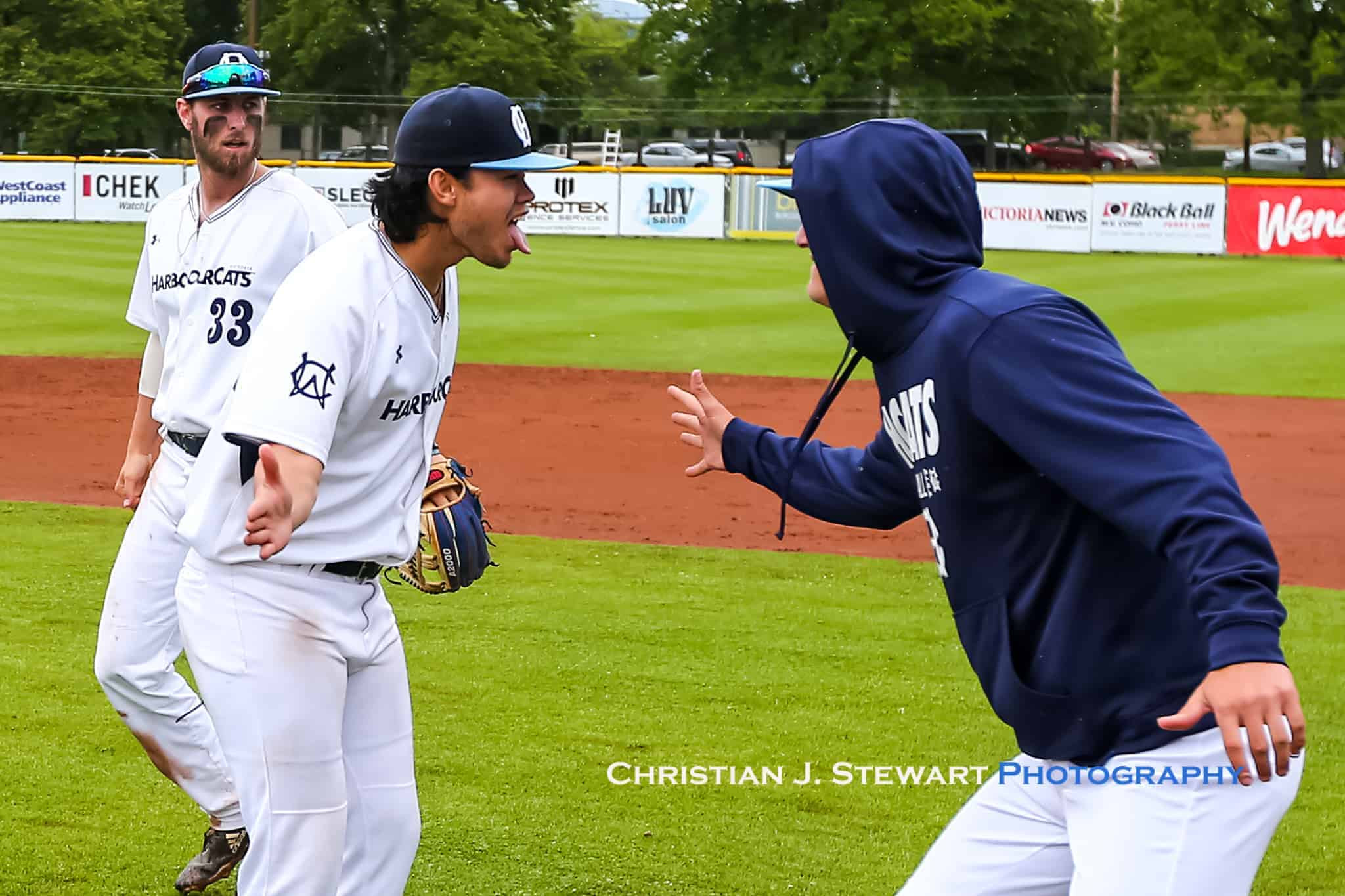 Bellingham (16-11), who came into the series in second place and three games behind Victoria in the division, took the first two games of the series to set up today’s winner-take-all matinee.

The HarbourCats, however, have not lost three consecutive games all season and rediscovered their bats Sunday. After being held to seven total hits in the first two games of the series, Victoria notched seven hits in the first three innings and exploded for four runs in the division-clinching game. 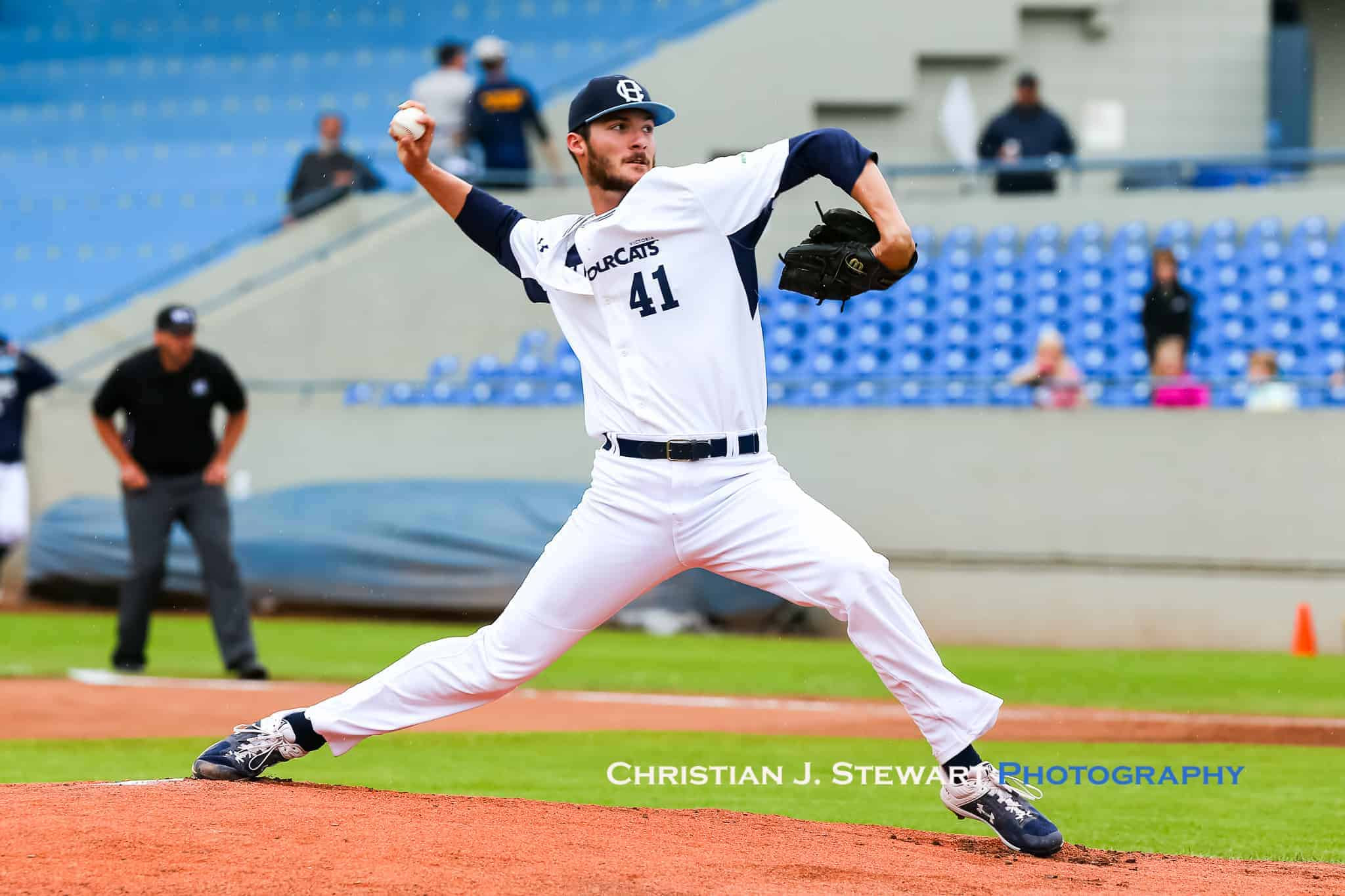 Jack Neely held Bellingham hitless through four innings in today’s game. Finishing with four strikeouts and just the one controversial run in the second. (Photo by Christian J. Stewart)

Meanwhile on the mound, one day after Jack Hyde held Bellingham hitless into the sixth, Jack Neely got the start and held the Bells hitless through four.

Despite not allowing a hit, Neely ran into some controversy in the second that gave Bellingham an early lead.

Jack Machtolf led the frame off with a walk, and advanced to third via a sac-bunt and wild pitch, while Tyler Hinkelman reached base one batter later with another walk. Nick DeNicola then launched a pop fly to right field, and with Machtolf waiting to tag third and head home, Kyle Sherick caught the out and immediately fired to the diamond. 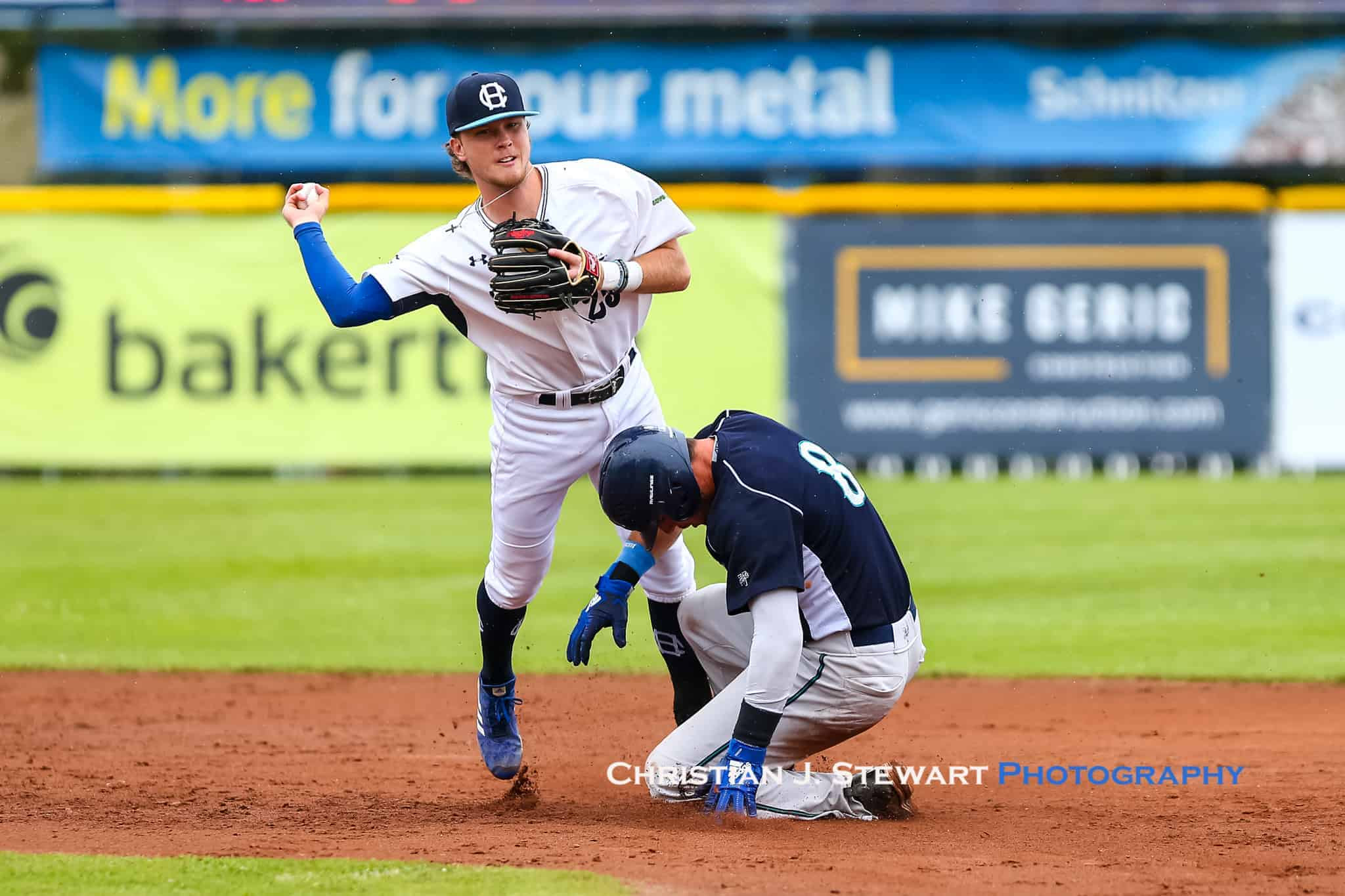 Chase Wehsener, however, cut off the relay throw from Sherick, and tossed the ball to Parker Bramlett at second who tagged Hinkelman for the final out of the inning. The home plate umpire ruled Machtolf scored before the tag was placed, which caused some arguments from coaches in the ‘Cats dugout.

With the top of the order due up in the third, the ‘Cats responded, as Bramlett reached with a single and advanced to third one batter later on a ground-out. Wehsener then smacked a RBI single to left that tied the game at one, and Nick Plaia’s RBI single two batters later gave Victoria their first lead of the series. 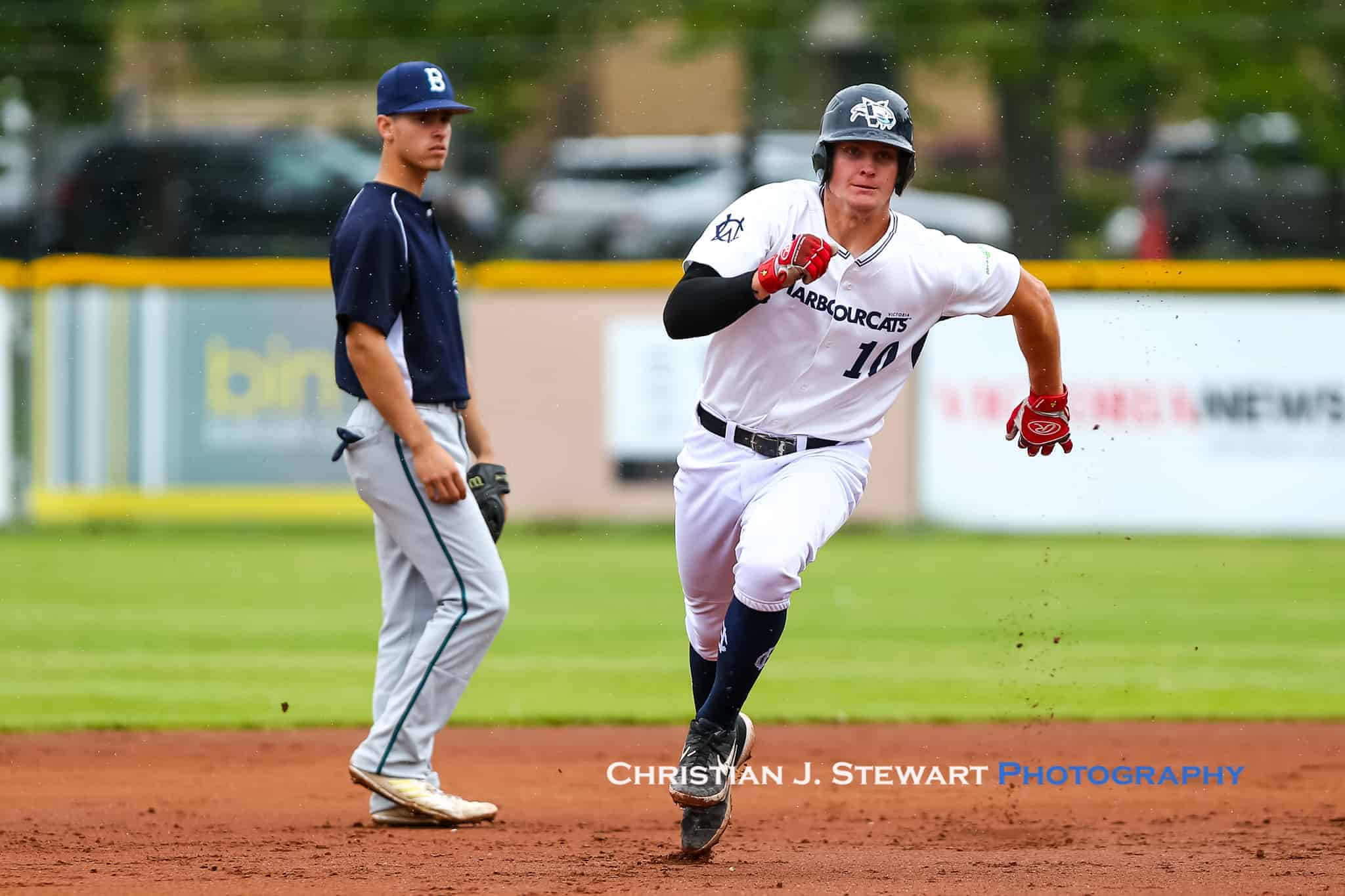 Tyson Hays sprints around second base while a Bellingham Bell can only stand and watch. (Photo by Christian J. Stewart)

Aaron Celestino, following a 10 strikeout performance in his last start on Canada Day, entered the game in relief in the fifth and picked up the victory with five dominate innings in relief. The righty out of Incarnate Word retired six of the first eight batters he faced, and received some insurance from his offence in the ensuing innings. 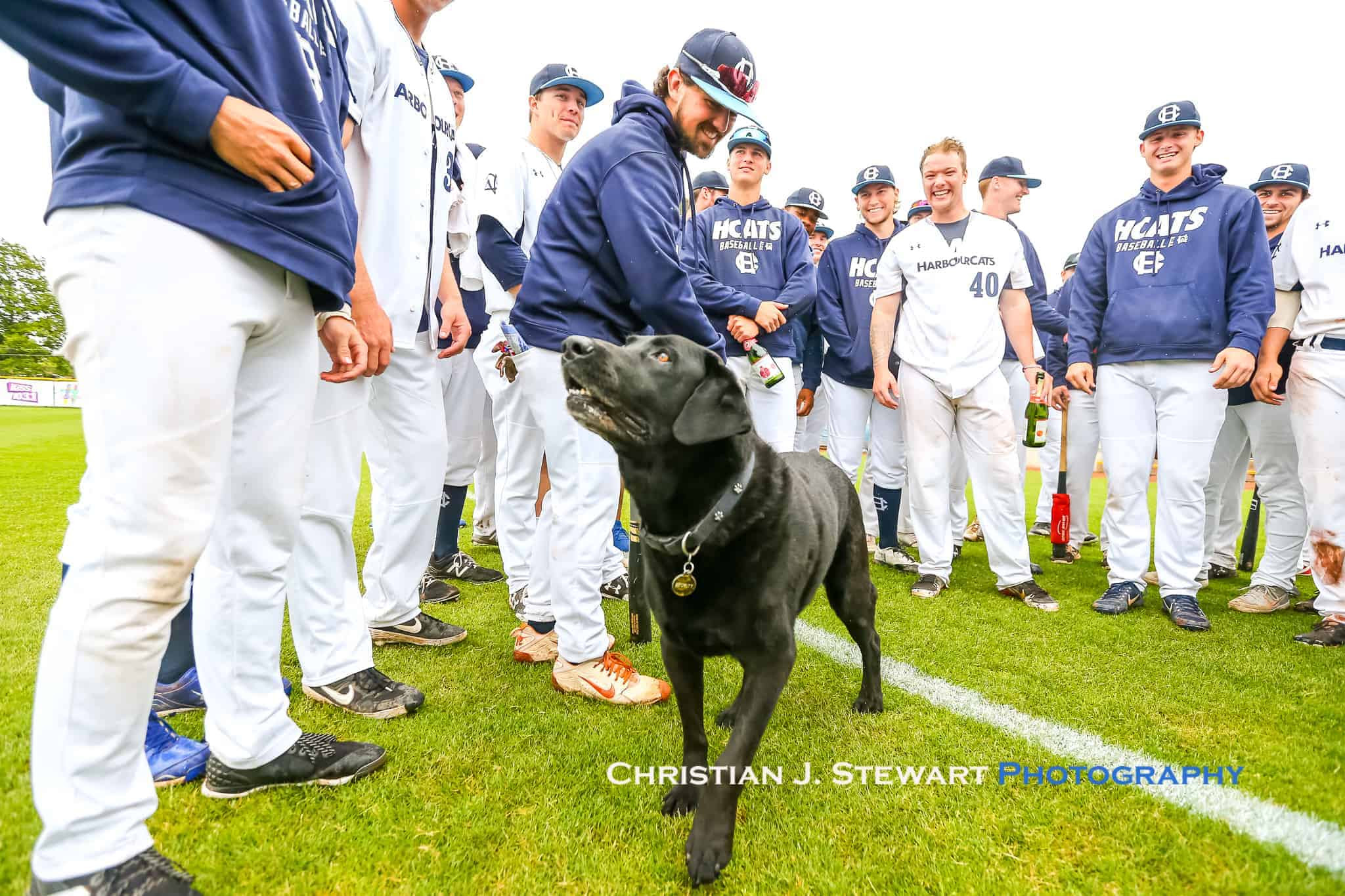 Beckett the HarbourDog celebrates with his team on Sunday (Photo: Christian J. Stewart)

Both Harrison Spohn and Jason Willow would smash solo homers over the left field fence to give Victoria a 6-1 advantage in the seventh, and the HarbourCats would score two more times in the eighth to jump in front by seven runs.

Coming back to the mound in the ninth, after retiring six straight Bells, Celestino induced a game-ending double play that sealed the game and division for Victoria. 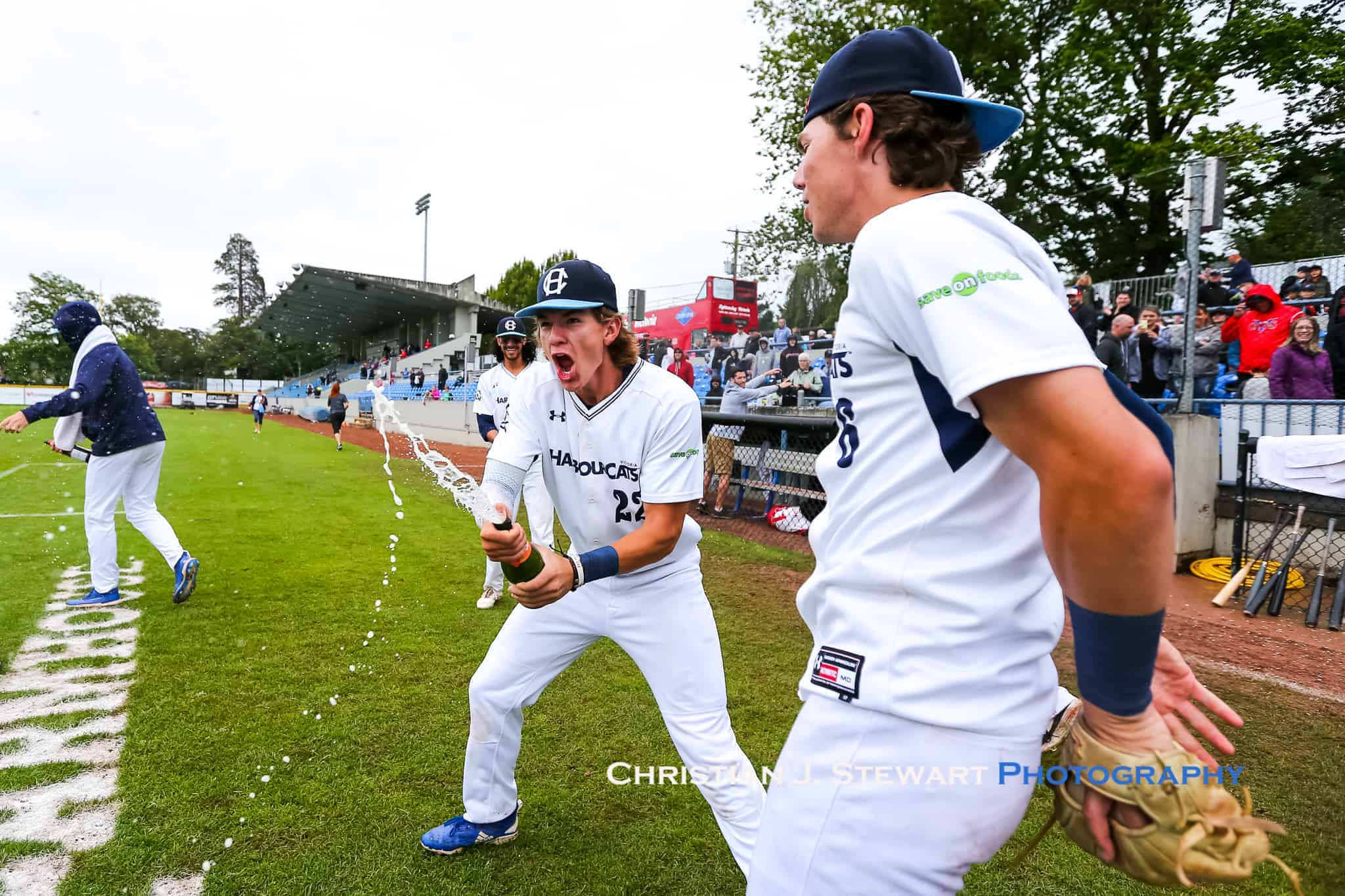 With a playoff berth now wrapped up, the HarbourCats will begin the Second Half of the WCL schedule tomorrow night in the first ever meeting with the expansion Ridgefield Raptors. First pitch is slated for 6:35p.m. 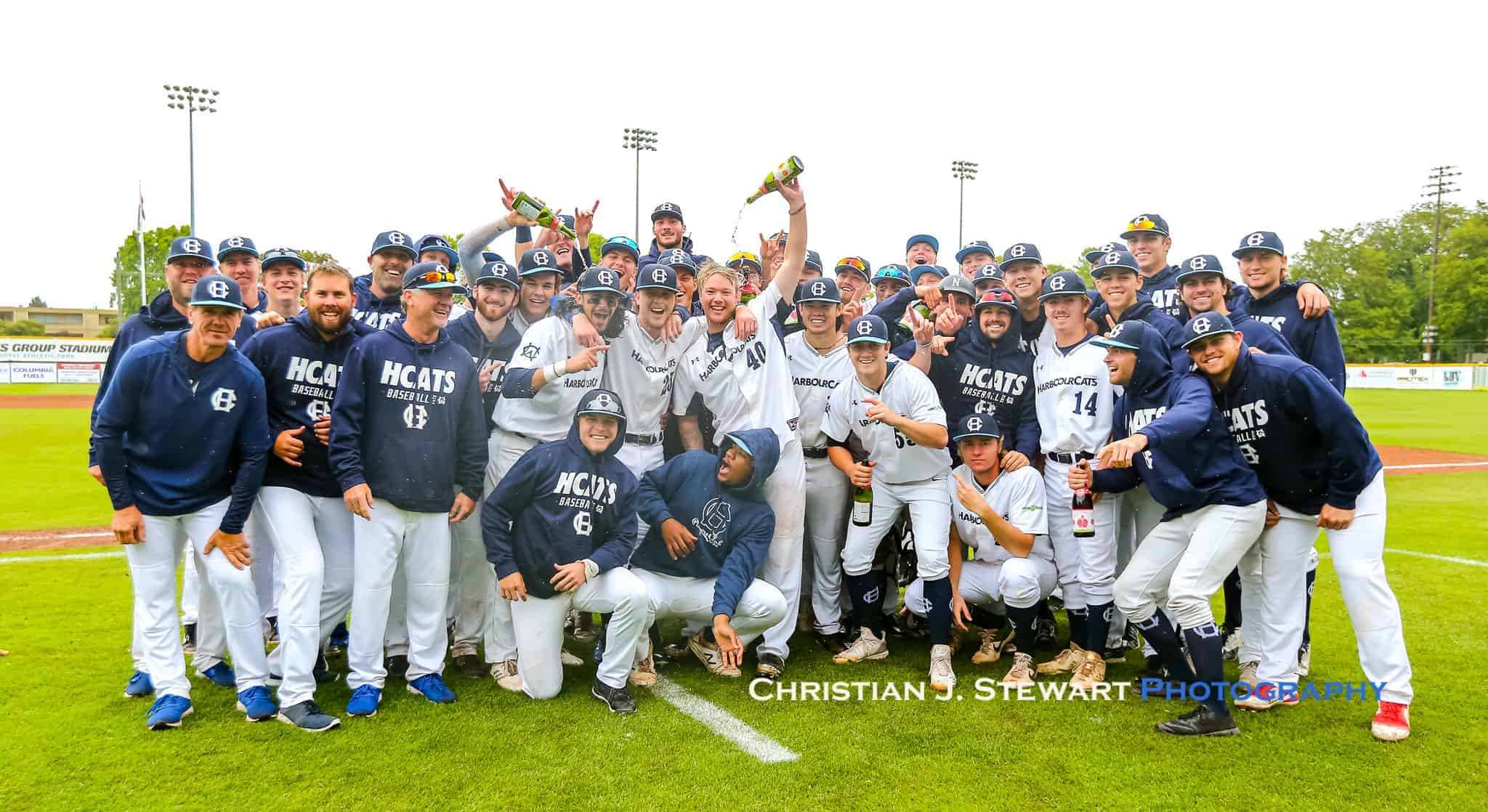