NHL Central Scouting has released its initial Players to Watch list ahead of the 2020 NHL Entry Draft and five current BCHL players have made the cut.

Each ranked BCHL player is listed as a C Prospect, which means a potential fourth, fifth or sixth-round pick.

The highest-rated CJHL player is Carter Savoie, a defenceman for the AJHL’s Sherwood Park Crusaders.

Last year, eight BCHL players were selected in the 2019 NHL Entry Draft, including Victoria Grizzlies alum and reigning BCHL MVP Alex Newhook who was chosen in the first round (16th overall) by the Colorado Avalanche. 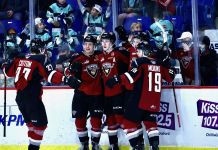