The Royals become the first team to reach the 10 win plateau with a four set victory over the Cascades. The Shand brothers led the offence and combined for 24 kills and 10 digs. Matt was excellent at the service line with five aces. Setter Jared Collin was great with 31 assists.

This match saw a lot of scoring and back and forth play with the Mariners outlasting the Bearcats without All-Canadian Braydon Brouwer or leading point getter Dario De Queiroz-Pereira in the line-up. Adam Kapteyn tried to fill the void with 10 kills and Sam Harder and Ted Graveson each tallied eight.

Meanwhile the Bearcats offence was led by a familiar face when Jakob Boschmann collected 13 kills and 12 digs along with a block assist.

The hometown Blues came out flying and swept the Chargers in three straight. Rafael Hilario was solid with 10 kills and two digs and Ben Friesen added eight kills, two aces and seven digs. His brother Simon quarterbacked the offence with 31 assists.

The Chargers offence meanwhile struggled with just 19 kills. Ty Moorman had a team high eight kills and Morgan Humphreys had five. The Chargers once again didn’t have Eduardo Bida in the line-up and Vitor Pereira only played in two sets.

Without Reid Marriott in the line-up on Saturday the Shand brothers took over for the Royals. Matt swung for 18 kills and 19 digs, while Ben had 10 kills and 17 digs with one ace.

For the second straight match the Blues made quick work of the Chargers taking advantage of the Chargers big weapons on the sidelines. Jacob Hopkins was the best Blue with 11 kills and seven digs. Ben Friesen tallied eight kills and 10 digs.

The Chargers were without Vitor Pereira on Saturday and Eduardo Bida played in just one set. Without those two in the line-up their offence looks a lot different. Brendan Folkerts did what he could with six kills, an ace and two digs. Graham Basi added five kills and five digs.

The Mariners won their eighth of the season with a three-set sweep over the Bearcats. Braydon Brouwer was back on the floor for the home side and led the way with 17 kills, added three assists and six digs. Adam Kapteyn had 10 kills and Isaac Bevis collected 13 digs.

The visiting Bearcats struggled with just 17 kills. Noah Boulus led them with six of those kills. 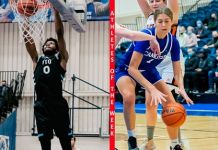