Isabelle Weidemann, Ivanie Blondin and Valérie Maltais skated to a bronze medal in the first team pursuit race of the World Cup season in Poland on Saturday. The medal is Maltais’ first on the World Cup circuit since making the switch to long track speed skating last year.

The trio, who finished fourth in the discipline at last year’s World Single Distance Championships, skated a time of 3:03.726 to put them behind Russia and the Netherlands on the podium. The Japanese ladies, who had won the last ten team pursuit events, fell on the track in the final pairing to end their reign.

Kaylin Irvine (Calgary, Alta.) and Marsha Hudey (White City, Sask.) both reached the top ten in the ladies 500m, skating the seventh and ninth fastest times of the day. It is the top World Cup finish of Irvine’s career over the distance.

Jordan Belchos (Toronto, Ont.) finished sixth in the men’s mass start, picking up four sprint points over the course of the race. Graeme Fish (Moose Jaw, Sask.) competed in the same event, but fell with eight laps remaining and crossed the line in 15th position.

The World Cup Speed Skating concludes Sunday with the men’s 500m and team pursuit, and the ladies 1500m and mass start events. Races will be streamed live on CBC Sports beginning at 9:00am ET.

“This medal is a really great step for our team. We haven’t skated together a lot; our first race together was at the World Single Distance Championships last year. We’re going to train on our bikes in Spain over the next two weeks and hopefully we go into the next race a bit more calm and confident in how we’re skating.”

– Isabelle Weidemann
“It was not our best race and there are definitely things we can improve on, so we’re going to take this medal and look forward to our next race. Our coach [Remmelt Eldering] will be with us for the next World Cup in Kazakhstan so it will be awesome to have him there to give us direct feedback.”
– Valérie Maltais 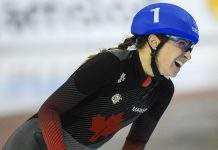