The two preeminent AA boys volleyball programs in B.C. are set for a Saturday night showdown with the gold medal on the line.

Since the turn of the century, the MEI Eagles and Langley Christian Lightning have combined to capture 13 provincial titles and a total of 27 medals over those 19 years.

Both schools are guaranteed to add to their lofty medal totals when they hit the court on Saturday night at Langley Events Centre to wrap up the 2019 BC Secondary School Volleyball Provincial Championships.

The action gets underway on Court 1 at 7 p.m.

MEI has won 10 provincial titles since 2000, to go along with a silver medal and five bronze medals. But they are in search of their first gold since 2015 and regardless of Saturday’s outcome, this will be the Eagles best finish since they won bronze in 2016.

Langley Christian has won nine medals (three gold, two silver and four bronze) in their past 12 seasons with their most recent podium finish coming last year when they took bronze. Altogether the school has three provincial titles under their belt – which is tied for third most in AA history with Lambrick Park while a fourth gold medal would pull them even with Ashcroft, trailing only MEI.

The gold medal would also be the first for the Lightning since they won back-to-back titles in 2016 and 2017.

“We were really shaky out of one rotation but we kind of won the game on the backs of Jonas (Van Huizen) and Tyson’s (Hofer) serve tonight,” admitted LCS coach Bryden MacTavish. “The two of them served lights out and applied a lot of pressure the whole night.”

As for the Eagles, coach Rocky Olfert said there wasn’t much panic when his team – which is predominantly Grade 11 – dropped the first set.

“You practice all year to understand that these situations might happen and you hope you learn from them. We have been in that situation before. mentally it is just a matter of resetting, refocusing and just trying to stay with our game,” he said.

“We knew it could be a long game it was just a matter of doing what we know we can do and settling the nerves a little bit and just playing MEI Eagle volleyball.”

The Lightning defeated the Eagles to earn the top seed out of the Easter Valley zone but MEI won 2-1 on the first day of provincials during Power Pool play. In fact, Langley Christian was seeded third following day one having gone 1-2 with losses to MEI and George Elliot. The Eagles won the pool at 3-0.

Despite that first-day hiccup, MacTavish was not too concerned.

“The whole message the week ahead was on day one you can’t win it and you can’t lose it so you can just make your life a little easier. We left that first day knowing what our road was and we are going to have to play one of those teams anyway and we have been close all year,” he said.

As for the Eagles, while they may be young in terms of competing at the senior level, but they are not short of championship experience with the Grade 11s having won the junior provincial title last year.

“We all want to keep competing and be the best in BC. It is a very motivated group,” Olfert said.

The Knights and Coyotes – in a rematch of last year’s championship final – will battle for bronze on Saturday at 3 p.m. 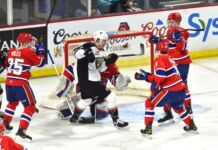