The full list of BCHL participants in this year’s tournament, which goes Dec. 7 to 15 in Dawson Creek, B.C., includes:

“After months of preparation and identifying players, it was great to gather in Calgary for a highly competitive camp and allow our players to compete for a spot on Team Canada West,” said Jamie McCaig, director of operations for Team Canada West. “We are excited to have our final roster selected, and our staff and players are excited for the opportunity to represent Canada and compete for a gold medal in Dawson Creek.”

Trail is the best-represented BCHL team with four players on the roster, while Nanaimo is next with two.

Canada West kicks off its tournament Dec. 7 against the United States. 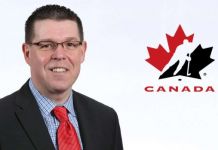 BREAKING : Scott Smith And Entire Board of Directors Step Down From Hockey Canada