WHISTLER, B.C.—The Canadians may not have been on the podium, but they stole the show in Saturday’s doubles race at the Viessmann Luge World Cup in Whistler.

Olympic medallists, Tristan Walker and Justin Snith, were the top Canucks on the leaderboard, sliding to a season-best sixth-place finish. But it was two 16-year-old Canadians, Caitlin Nash and Natalie Corless, who grabbed the international spotlight while making history on home ice as the first women ever in the 62-year history of the Viessmann Luge World Cup to compete with the men.

Struggling to find their consistency and speed in the first two races of the World Cup season, Walker (Cochrane, Alta.) and Snith (Calgary) put two solid runs together for their top result of the year, finishing in sixth spot at 1:17.036.

“Sixth is a bit disappointing. We are happy with the performance, but the result doesn’t reflect the work we’ve been doing,” said Walker, who added the duo’s best finish in Whistler was fourth place at the 2013 World Cup.

“We have been on the podium before, and with a performance like that, I’d like to see us a little closer to the medals.”

Sitting in seventh spot after their first blast down the lightning-quick nine-corner track that twists down Blackcomb Mountain, the 11-year veterans of the Canadian squad grabbed one more spot up the standings with a solid second run to snag sixth.

Germany’s Toni Eggert and Sascha Benecken slid to the gold medal with a two-run time of 1:16.644. Germany’s Tobias Wendl and Tobias Arlt won the silver medal at 1:16.703. Russia’s Vsevolod Kashkin and Konstantin Korshunov stopped the clock at 1:16.878 for the bronze.

After the medal ceremony, German luge legends Wendl and Arlt presented their podium flowers to Canadian teenagers, Caitlin Nash and Natalie Corless, who slid into the history books as the first women to compete in doubles on the Luge World Cup.

“It is crazy. I don’t think it has sunk in yet, but we proved today that women can do this,” said Corless. “We hope this gets people excited for women’s doubles which is coming into the sport.”

In an effort to provide more competitive race opportunities for women, the International Luge Federation has been introducing women’s doubles racing on the youth circuit. Corless and Nash have been excelling in the new format. They were the Youth A Overall World Cup winners in doubles racing last year.

The Baby Canucks, who grew up down the road from the Whistler Sliding Centre, pulled the community to the 2010 Olympic venue to share in the special day and did not disappoint.

The Canadians finished the two runs with a time of 1:19.339 for 22nd place in the 23-sled field. The only team they beat was the Italian duo of Ivan Nagler and Fabian Malleier, who crashed in the final run.

“There were definitely a lot of nerves today. We wanted to lay down two good runs and pull a good start,” added Nash.  “We had a couple of goals in mind and we achieved those. We just wanted to show everybody what we can do so we are really happy.”

The talented young women used the race as another test in their continued preparations for the next month’s Youth Olympic Games where women’s doubles will be in the lineup for the first time.

The BMW Sprint World Cup capped off the weekend at the Whistler Sliding Centre. The newest race event on the Viessmann Luge World Cup consists of the top-15 athletes in each discipline competing in a one-run race.

Canada’s Walker and Snith were back in the start handles for the doubles sprint where they finished 13th at 27.938. Germany’s Toni Eggert and Sascha Benecken won the doubles category with a time of 27.759.

Austria’s Reinhard Egger won the men’s BMW Sprint World Cup with a time of 36.449. No Canadians were in the race. 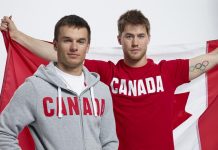 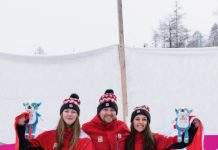 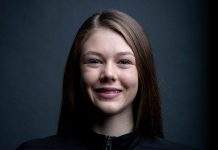