The Victoria Shamrocks selected Nathan Kozevnikov with the 5th pick of the WLA draft and promptly flipped him to the Langley Thunder in exchange for Victoria native Brad McCulley.

McCulley completed his rookie season as the Thunder’s leading scorer with 17 goals and 37 assists.  The former Jr. Shamrocks star was thrilled to head home. “Can’t thank the Thunder enough for the opportunity in Langley this past summer, I learned a ton and had a great time. With that said, cannot wait to get home and get started with the Shamrocks.”

Shamrocks general manager Chris Welch was equally as excited to acquire McCulley. “We’re thrilled to bring Brad home and add him to our growing group of young Victoria players. He has all the elements you look for in an offensive player, size, speed, skill and grit and he’s an extremely hard worker who gives his all every time he steps on the floor. Plus he’s a quality individual with great character and leadership potential and I’m confident he’ll be a great Shamrock player for many years to come”

The Shamrocks then moved a 2021 2nd round pick to the Thunder so they could move up and select Brian Robb of the Victoria Jr Shamrocks in the 3rd Round, 19th overall.  Robb had 6 goals and 9 assists in 13 regular season games and chipped in with 2 goals and 3 assists in the Minto Cup. Both McCulley and Robb graduated from the Jr Shamrocks as the club’s captain.

In the 4th round, the Shamrocks selected Coquitlam native Josh Goble with the 28th pick. Goble suited up for 19 games with the Jr. Adanacs and appeared in two more games during the Minto Cup.

The Shamrocks headed up-island with their 5th Round pick as they selected Nanaimo’s Mathieu Jung with the 35th overall pick.  Jung posted 2 goals and 11 assists in 13 games for Jr Timbermen last season.

In the 6th & 7th Rounds, the Shamrocks returned to the local talent pool by selecting a pair of Jr Shamrocks in Nick Murray and Clark Pickup.  Murray, the son of Jr Shamrocks general manager Wade Murray had 6 goals and 15 assists for 21 points in 14 games played. Pickup appeared in 20 games picking up a pair of assists. Pickup is the younger brother of current Shamrock Cole Pickup.

With their final pick in the 2020 draft, the Shamrocks selected Issac Richmond of the Delta Jr A Islanders. 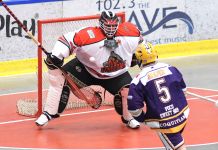