The University of Victoria Vikes are pleased to announce the 2020 UVic Sports Hall of Fame class. Two-time national golf champion Christina Proteau (Spence) and multiple-national champion in cross country and track, Trish Wellmann-Fougner, will be inducted as part of the Vikes annual Celebration of Championship Banquet on April 1 at the Victoria Conference Centre.

The two inductees will be part of the 18th year of the UVic Sports Hall of Fame, which was founded in 2002 as a way to honour varsity athletes, coaches, teams and builders who have contributed significantly to sport or recreation at the University of Victoria.

“At the Celebration of Champions Banquet, we recognize current athletic accomplishments as we also honour the past through our Sports Hall of Fame inductions. We are proud and privileged to welcome Trish and Christina this year – two leaders in their respected sports who have contributed so much to the legacy of UVic athletic excellence,” said Clint Hamilton, Director of Vikes Athletics and Recreation. Proteau becomes the first golfer inducted into the Sports Hall of Fame.

After a successful four-year collegiate career at the University of New Mexico, Proteau’s future husband discovered that she had eligibility remaining in non-American tournaments if she played for the Vikes.

The Port Alberni golfer spent a pair of seasons with the Vikes and dominated on the links every step of the way.

In 2007, she carded a 298 to be named the individual champion at the Canadian University/College Golf Championship by five strokes. She led the way and helped the Vikes finish second in the team category.

She defended her individual championship the following year when the national tournament stopped at the Cordova Bay Golf Club. This time she shot a 297 to win by 12 strokes and her performance was enough to earn the Vikes their first national team title.

Proteau just wasn’t taking electives at UVic during her time with the golf team either. Whenever she wasn’t on the driving range, she was in the library studying, as she was working her way through the UVic Faculty of Law.

“It was a little bit of a backwards path for me. Usually, golfers don’t get better once they start law school, but that’s how it worked for me,” said Proteau. “I have vivid memories of training for nationals and then rushing back to study for the bar exam. For a while there, my life was study, play, study, play and then more studying.”

Aside from teeing it up with the Vikes, Proteau also represented Canada at the FISU World University Games in Bangkok, Thailand, in 2007. She captained the Canadian squad and finished 27th overall as the top Canadian. She returned the following to the FISU Games, this time in Sun City, South Africa. Once again, she was the top Canadian on the leaderboard and finished 23rd overall.

After her time on campus, Proteau embarked on an amateur career that has been highlighted by nine provincial and five national championships. She even appeared in United States Women’s Open Championship in 2011, along with seven other U.S. Women’s Mid-Amateur Championships. Proteau still competes on the amateur circuit and has a great feeling this year about picking up her first provincial or national title in two years.
.
“Certainly, Christina is one of the best golfers to ever pass through this program. She is a model of excellence in all that she did as she managed to train and compete as one of the top golfers in the country, all while going though law school and providing strong leadership to her Vikes teammates,” said Hamilton. Wellmann–Fougner joins her teammates Silverado Socrates, Robyn Meagher and Ulla Hansen as individual inductees, along with the rest of 1987 cross country squad in the team category in the Sports Hall of Fame. Other cross country and track inductees are Debbie Scott and Carey Nelson.

In Wellmann-Fougner’s first year at UVic in 1982, she launched her pre-season that summer by winning gold in the 800-metre at the Pan American Junior Championships in Venezuela. The following varsity season, she helped her cross country team capture gold in Canada West and bronze at the CIAU championships. Later that spring she went on to set a conference and Canadian Junior record in the 1,000m in a time of 2:50.21. In the same meet, Wellmann-Fougner added another gold medal in the 1,500m and was named Outstanding Female Performer for Canada West for her efforts. She was presented at the end of the 1983 season with the UVic Rookie of the Year (The Robert T Wallace Shield).

In the summer of 1983, Wellmann-Fougner was invited to take part in an Olympic warm-up event in Los Angeles with 38 other countries where she competed in the finals for the 800m.

The following 1983-84 Vikes season, Wellmann-Fougner helped her cross country team to another Canada West Crown and later in indoor season broke her own Canada West 1,000m record from the year before to claim gold and anchored her 4x800m relay team to a gold medal. At the CIAU meet, she claimed her first championship win in the 1,000m in a time of 2:47.75 and added another in the 4x800m relay. Later that summer, Wellmann-Fougner received the bronze medal in the 1,500m at the National Olympic trails in Winnipeg.

“Our varsity team was strong in so many ways and that strength helped motivate us in our competitions. We were friends and supporters for each other in our running days and have remained close to this day,” said Wellmann-Fougner.
From 1984-86, Wellmann-Fougner was plagued with Achilles injuries. Despite the reoccurring injuries, she battled through and helped the 4x800m relay team win gold during the 1985 Canada West meet and set a new conference record of 8:58.55. She wasn’t done there, as she added a bronze medal in the 1,000m. The following cross country season was yet another gold at Canada West and CIAU championships.

Wellmann-Fougner’s final year in 1987-88 was some of her finest moments in both cross country and indoor track. It started with an outstanding performance with the cross country team at Canada West in which her seven teammates occupied the top seven places. Their dominance continued at CIAU championships in Victoria that season with another win and all members finishing in the top ten with a record 15 points. That record stands today and was a significant factor in the team’s 2018 induction into the Sports Hall of Fame in 2018.

“A strong individual performer and a driving force behind one of UVic’s most iconic national championship programs, Trish Wellmann-Fougner is a most deserving recipient of our program’s highest honour,” said Hamilton.

With her varsity cross country season behind her, Wellmann-Fougner completed her final indoor Canada West season with two more records, one in the 1,000m in 2:45.10 and the other anchoring the 4x800m relay team for another win. Her performances earned her the outstanding athlete award for the meet. Her final CIAU Championships ended with a tough silver medal in the 1,000 meters in 2:44 and a record-breaking win for the 4x800m relay, smashing the old record by more than five seconds. Wellmann-Fougner finished the 1988 outdoor season with Canada’s fastest time in the 800m at the International Harry Jerome Classic in 2:01.20, missing the Olympic team to Seoul, Korea by less than half a second.

Both inductees will be honoured at the Celebration of Champions and UVic Sports Hall of Fame Banquet on Wednesday, April.1, at the Victoria Conference Centre. 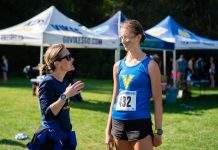