The defending champion Charles Hays Rainmakers will take on the King George Dragons as the top two seeds will meet to determine the BC High School 2A Boys Tournament provincial title.

The top-seeded Rainmakers held off a third-quarter charge by Brentwood College for the 69-55 win while the No. 2 Dragons from Vancouver topped the Lambrick Park Lions 84-65. Neither team trailed in their respective semi-final games setting up their first meeting of the season in the championship game.

The Rainmakers rattled off the game’s first 10 points and led by 19 at the half. Brentwood College did cut the deficit down to four points in the final quarter but a 10-0 run quickly put Charles Hay firmly back in control.

And just like the Rainmakers, King George also used a balanced attack with five players between 12 and 18 points. Romel Eyobe was high man with 18 points also dishing out four assists and getting six steals. Silvio Suchy added 15 points and seven rebounds, Jodhan Uppal and Gareth Wintjes had 13 points apiece and Nikola Guzina had a dozen points to go along with five rebounds, five assists, six steals and a pair of blocked shots.

While the Rainmakers were in last year’s final and are in search of a fifth title (they won a pair 2Aof championships as Prince Rupert while also claiming the 4A title back in 1964, the Dragons are back in the title game after falling short in 2018. 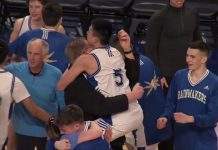