It was a banner day for the athletes of Varsity Performance Karate at the 2020 Karate BC Provincial Team Selection competition held March 7th at the Richmond Oval.

Seven of the eight athletes trying out for berths on the BC Provincial Karate Team heading to the 2020 Canadian National Junior Karate Championships earned spots. Athletes earned Provincial ranking through a combination of results at today’s Selections as well as from performance at the 2019 Provincial Championships held last December.

Leading the team by securing a spot in both karate disciplines of kata and kumite is Olivia Brodie. Olivia earned gold in both the female 14/15 kata and the female 14/5 -54kg kumite at the Selection competition. Brodie is currently provincially ranked #1 in her kumite division and is in the Top 2 ranked kata athletes in her age group.

Ella Crowle earned a #1 Provincial ranking with a series of decisive wins in the female 14/15 +54 kg kumite division that secured her a 1st place finish in today’s event.

Sofia Devlin (female U21 -68 kg kumite) earned a #3 Provincial ranking through her performance at the 2020 Provincial Championships and a corresponding spot on the Provincial Team.

Robin Goraya fell just short of securing a Provincial berth in the male 14/15-year-old -70 kg but will be able to take valuable lessons learned from this season into his preparation for 2021.

Karate Canada’s 2020 Junior Nationals Championships occurs May 1-3, 2020, in Toronto, Ontario. Over 400 athletes aged 8-20 from across the country are projected to attend. 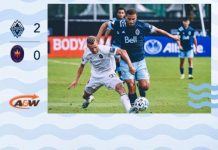 ‘Caps defy odds storm back and advance to Round of 16