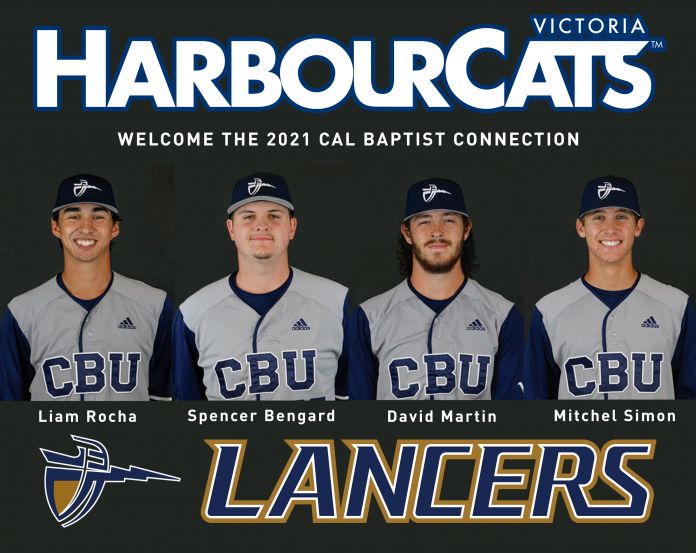 It is a school that has provided the HarbourCats with two of the most popular players in team history – Nick Plaia and Harrison Spohn – and Cal Baptist is now poised to add to that tally, as four more Lancers will head north to Victoria for the summer of 2021.

Whether right-handed pitchers Liam Rocha and Spencer Bengard and infielders David Martin and Mitch Simon can elicit the same “Baby Shark” popularity as Plaia, or team leadership and  poise as Spohn remains to be seen, but chances are pretty good all four will be quality players in the HarbourCats line-up in 2021.

“The  players we have received from Cal Baptist in the past have always been rock solid for us,” said HarbourCats GM and Managing Partner Jim Swanson.  “Everyone of course remembers what Nick and Harrison did for us, but we also had Matt Amrhein, who was lights out in a closing role for us in 2019 and a few years ago, DJ Porter played a huge role in getting us to the 2017 finals against Corvallis.  We have no doubt these four players will contribute in the same way in 2021.”

Rocha (6’1″ 191lbs.) from San Dimas, California and Bengard (6’1″ 217lbs.) from Moreno Valley, California, are both freshmen with impressive prep records behind them.  Rocha was a two-time All-Valley Vista League second team award winner, while Bengard was twice named Ivy League Pitcher of the year, with a no-hitter to his credit, posting a 1.89 ERA over 49 innings of work as a Junior.

It is anticipated that both will see regular action on the mound for the HarbourCats.

Both Martin and Simon will give the HarbourCats a number of options in the infield and outfield.  Sophomore Martin (6’1″ 185lbs.), from Chino Hills, California, can play catcher, first base and the outfield, and in the shortened 2020 Lancers season, had four hits, three RBI and a .429 on-base percentage in four starts.

Simon (6’0″ 170), another freshman, from Fallbrook, California, will be a key insert at third or second base.  He was a All-Southern first-team award winner and served as team captain at Linfield Christian in Temecula, California. He did see a bit of action for the Lancers in 2020, hitting a pair of homers during the shortened spring season.

“Cal Baptist not only produces quality players,” said HarbourCats head Coach Todd Haney, “they produce quality people. We look forward to welcoming these four players to our HarbourCats family and can’t wait to see what they will do for us.”