For the second time in as many weeks, Canada earned a pair of World Cup medals in the Team Pursuit. The Canadian women’s team set a new track record to win their second straight gold medal in the discipline, while the men’s squad earned silver earlier in the day to kick-off the ISU World Cup Speed Skating in Heerenveen, the Netherlands.

The women’s team of Ivanie Blondin (Ottawa, Ont.), Isabelle Weidemann (Ottawa, Ont.) and Valérie Maltais (Saguenay, Que.) made it back-to-back gold medals on Friday, posting a time of 2:54.640 – a new track record at the historic Thialf oval – to finish ahead of the Netherlands (+0.94) and Norway (+3.58).

And after winning bronze at last weekend’s World Cup opener, the Canadian men’s squad put forth a spectacular skate to claim silver. Ted-Jan Bloemen (Calgary, Alta.), Jordan Belchos (Toronto, Ont.) and Connor Howe (Canmore, Alta.) completed the distance in 3:39.943, which put them only 0.86 seconds behind the gold medalists from Norway.

Canada is well positioned to reach the podium in both disciplines at the upcoming World Championships. After a pair of World Cups, the women’s team is ranked first overall with 240 points, ahead of the Netherlands (216) and Norway (192), while the men’s team sits in third with 204 points, just behind the Dutch (206) and Norwegians (228).

Action concluded on Friday with the Mass Start semifinals, where Canadian Jordan Belchos, who finished fourth in last weekend’s event, easily advanced to the finals with a fifth-place finish in his qualifier.

The ISU World Cup continues tomorrow, where the 500m, 1500m and Mass Start finals are on the schedule. CBC Sports will have live streaming coverage of the races beginning at 5:25 am ET on Saturday and 2:40 am ET on Sunday. For televised coverage of this event, tune into CBC’s Road to the Olympic Games program on Saturday at 5:00 pm ET and Sunday at 2:00pm ET. Visit the schedule for broadcast and streaming times in your area.

“It’s amazing to me how quickly we’ve all clicked together. While we train together, we don’t train specifically for the Team Pursuit all the time. I think today we executed pretty well. I’m really impressed with Connor [Howe] for coming in these past two weeks and doing just a perfect job.” – Jordan Belchos

“We changed our strategy for this weekend’s race; I started, then Ivanie [Blondin] and then Isabelle [Weidemann] did four laps at the end. Our job at the back of the pack was to push as much as possible in order to maintain the top speed Ivanie gave us at the start of the race. We were really nervous before the race, but I think we really focused on the tactical and technical aspects. We executed them well, even better than expected, and we proved to ourselves that we could go even faster! I’m proud of us because, when you have a strategy that wins the weekend before, it takes courage to completely change things in order to try and get even better.” – Valérie Maltais 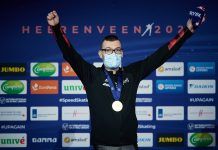