The Victoria Golden Tide, the most recent entry in the Canadian Collegiate Baseball Conference (CCBC) is preparing for their debut in the 2021-2022 CCBC season and today is announcing the initial list of players that have committed to Head Coach Curtis Pelletier’s program and will begin working out in early September

Even in a time with a pandemic, and restrictions on activity and usual recruiting efforts, Coach Pelletier has been able to secure tremendous student-athletes to give the Golden Tide a strong start in the CCBC, a league that has been around for nearly 20 years.

These are the first five to be announced, with more players to be fully confirmed over the coming weeks.

Included in the first five to be made public is National Junior Team infielder Brody Alexandre of Swift Current, SK, along with Island products Tristan Bolger, Jacob Popadynec and Nick Lee, and Ethan Keates from Calgary.

“There has been a lot of interest in the program, from when we announced it last fall and made the commitment to join the other great programs in the CCBC,” said Pelletier, also an assistant coach with the Victoria HarbourCats, and the Director of Player Development for the HarbourCats Players Club youth programs.

“I’m very excited about every player who has shown interest, and those we’re announcing today will be key parts for us. We’ll focus on development in a strong team culture, these are athletes who are committed to taking this step and improving. Quality players will always find ways to bind together and challenge each other.” 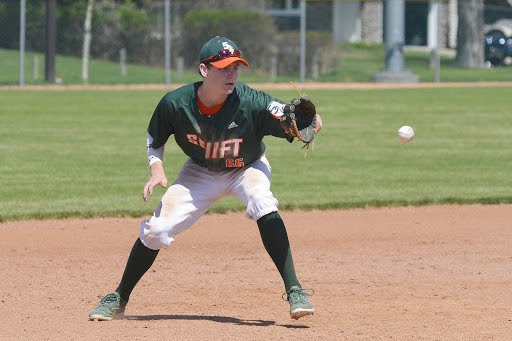 Alexandre, a 6’2″ 175lb. infielder who plays the corner positions, has a lefty bat that has drawn the attention of scouts.  He was a member of the Canadian Junior National Program in 2020 and also played for the Langley Blaze in the BC Premier Baseball League (BCPBL).

Keates at 5’9″ 180lb. brings CCBC experience to the Tide, a catcher/infielder who is transferring to school in Victoria from TRU in Kamloops.

Lee is a hard-throwing 6’2″ 175lb. right-hander from Victoria who played for Okanagan College in the CCBC. Prior to that he was a member of the Victoria Mariners in the BCPBL, where in 2017 he had a 1.23 ERA in 11.1 innings pitched, striking out 11 and walking just three.

Bolger, at 6’1″ 170lb., is a versatile fielder out of the Victoria Mariners PBL program and is an example of the strong initial local talent that will be on the field for the Golden Tide in their first season.

The league has suspended play for the 2020-2021 campaign due to the ongoing COVID-19 pandemic, but is anticipated to be back to a full season of play for 2021-2022 and the Golden Tide will be ready to compete for the CCBC title.

“We have worked tirelessly signing players from all over Canada,” added Golden Tide manager Curtis Pelletier. “Our first year will be primarily comprised of first year players (Freshmen) and although we are a young team, we are confident that this group of athletes will come in and compete right away.”

“We can’t wait to get into the park and begin this journey for a CCBC championship with our local supporters here in Victoria.”

Royals Double Up Rockets On The Road