VICTORIA (Canada) – Perhaps Canada won’t cruise to the Olympics, after all. The hosts, who have been praised as the heavy tournament favorites all weekend, struggled with an energized Greece squad before prevailing with a 97-91 win Tuesday in the opening game of the Olympic Qualifying Tournament in Victoria.

Turning point: Andrew Wiggins buried a deep 3-pointer with 3:44 remaining in the third quarter to give Canada a 67-65 advantage – their first lead since the opening frame. Canada never trailed again. They led 74-71 at the end of the third, further distanced themselves from Greece by opening the fourth on a 9-0 run and led by as many as 12.

Game hero: RJ Barrett. The 21-year-old rising NBA star scored 12 of his 22 points in the fourth quarter to help his team stave off Greece, who fought to trim Canada’s lead to four points with 1:01 left in the game. In contention: Andrew Wiggins led all scorers with 23 points, 10 of which came in the third quarter, and Nickeil Walker-Alexander added 18. He scored 16 of them in a huge second quarter, keeping Canada close in a game Greece controlled to that point. Konstantinos Mitoglou had 14 points to lead Greece.

Bottom line: It won’t be easy for Canada. Greece led for much of the first two-and-a-half quarters and didn’t let up in the fourth. Early turnovers by the hosts let Greece grab a lead and go to the locker room up 50-46.

They said: “This is our first game, all of us all together. Practice, you work on so much stuff, but nothing’s like that game experience and feel and flow, getting to go against a team that has good talent. We found a way to figure it out, keep our strengths going and play together and it flowed.” – Canada’s Nickeil Walker-Alexander

“I don’t think in my 45 years of coaching I’ve ever said more than five times that I was super-proud of a team after a loss. I really am. Their effort was astonishing. They haven’t been together but a week because a whole new team came in. We learned a lot from this game.” – Greece coach Rick Pitino

Canada now face a stiff challenge China Wednesday afternoon at 4:05 pm, while Greece will get a down day, facing China on July1st.

Canada Advances To Semi-Finals With Lopsided Win Over China 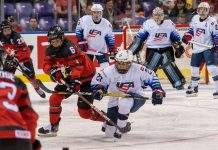