The University of Victoria women’s field hockey team completed the “three-peat” as Canada West Field Hockey Champions, finishing the Canada West regular season with an unbeaten 7-0-1 record to claim the conference title for the third-straight season.

BY THE NUMBERS
22 – The total number of Canada West Championships won by the Vikes with their 2021 title.
4 – Number of games played, and won, by the Vikes in the tournament – for the second time this season.
3 – Number of Vikes that recorded two-goal performances (Mittelsteadt x2, Mollenhauer, and Langkammer).
2 – Number of shutouts posted by goalkeeper Robin Fleming.
1 – The highest number of goals conceded by the Vikes in a single game the entire season.

THOUGHTS FROM HEAD COACH LYNNE BEECROFT
“I thought our team played extremely well this weekend,” began Beecroft. “Playing four games in three days is tough, especially ending with two games on Sunday. We look forward to continued growth over the next two weeks before heading to nationals.”

UP NEXT
The Vikes will head to Ontario to take on the OUA Champion in a best-of-three series for the 2021 U SPORTS title. 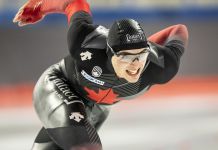