Steve McKinlay could only sit and watch as his team struggled to end the regular season, missing the final two games as the Grizzlies Lacrosse Club lost their final five games of the Arena Lacrosse League as they went from battling for first place to finishing in third spot.
McKinlay also missed last week’s playoff game, which thankfully for him was a victory, to advance the Grizzlies to the ALL Western Division Championship, a best-of-three series against the first-place Sea Spray Lacrosse Club.

“It gives me a heavy heart (to miss games) but seeing the guys come through with the win last week to extend the season and to be able to play today (is great),” he said. “Every time you get to come to the arena and play lacrosse is awesome.”

Back in the line-up for game one on Saturday afternoon at Langley Events Centre, McKinlay came up with the game’s biggest goal with 33 seconds to play to snap an 8-8 tie as the Grizzlies took game one by a 9-8 score.

“I picked the ball up in the lefty shooter spot and just went hard under the net, Coach T (Tewanee Joseph) has been saying the goalie has been going low all game, so I (faked) one low and came over the top,” McKinlay said of the winning goal.
It was a tight contest throughout as neither team led by more than two goals and was tied on six separate occasions with both goaltenders delivering outstanding performances.
Special teams played a huge factor in the contest as the Grizzlies scored four power-play goals –although they did surrender back-to-back shorthanded goals on the same power play which gave the Sea Spray a 6-4 lead with just over a quarter to play.

“I think both teams played exceptionally well, and pace of the game was fantastic,” Joseph said.

The Grizzlies began the season 5-2 before a five-game losing streak to end the regular season. But with last week’s playoff victory and then another win in game one of the Western Division championship, the team has more closely resembled the squad from December and January then the one which struggled in February and early March.

“We played as a team. When you connect as one and play as a family, it is hard to beat you,” Joseph explained.

“The main thing with power plays is always moving the ball. When you can assess and have a look at what is happening – and with us, when you start to connect as a team, then the power play becomes a lot easier, and you are able to identify the situation. I think the boys did a great job of doing that today,” Joseph said.

Brandon Humphrey was the game’s first star, making 50 saves on 58 shots for the Grizzlies, while his counterpart Matteo Tack was the second star with 42 saves on 51 shots. McKinlay was the third star following his one-goal, five-point game.

Grizzlies’ Erik Maas matched McKinlay’s five-point effort, finishing with two goals and three assists, including the tying goal with 76 seconds to play. Brian Smith and James Baker each scored twice while Baker also added two assists. Kieran McKay (one goals, two assists) and Andrew Gresham (one goal, one assist) rounded out the scoring and Aidan Baker finished with four helpers on the game.

The Sea Spray were led by hat tricks from both Dalton Lupul and Keegan Bell while Tyler Kirkby (one goal, two assists) and John Hofseth (one goal, one assist) had the other scores. Connor Goodwin and Eli Batt both had a pair of assists.

Game two is set for Sunday at Langley Events Centre beginning at 1:00pm. Should the Sea Spray earn the victory, the two teams would play a 15-minute mini-game shortly after game two concludes to determine the ALL Western Division champion. 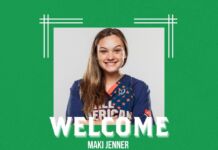