The Golden Tide welcomed the Prairie Academy Dawgs into town on a Friday evening where the Golden Tide laid the law down on their visitors from Lethbridge, Alberta. That law came in the form of a 14-3 thrashing. Saturday featured a doubleheader for the second and third games of this 4 game weekend series. Victoria stifled Prairie’s offence in the first game at noon with a 5-0 victory that featured some timely hitting with runners in scoring scoring position. The second game of the double header was the polar opposite to say the least. Prairie Academy scored one run in the first inning,  five more in the second and ended up  finishing the game with a lopsided 14-2 scoreline. Sunday morning would be much of the same story as the Dawgs brought their hot bats the Wilson’s Group Stadium once more. The Albertan squad would use a seven run third inning to propel them to a 13-6 victory in order to split the series with Victoria. 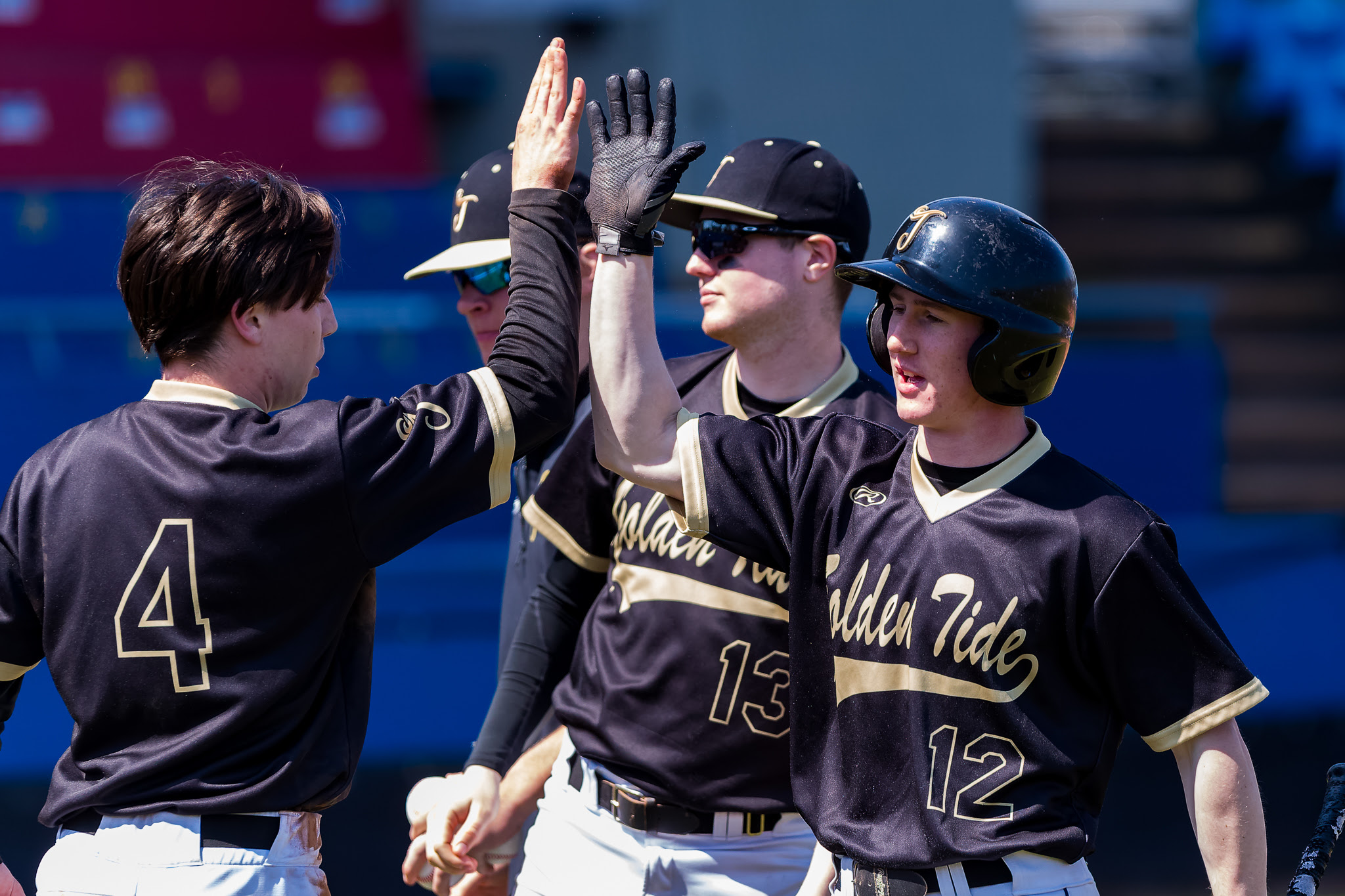 Victoria’s early success in the series was fuelled by some spectacular performances on the mound, both from the two starters and some notable relief appearances. Brady Wilson took to the rubber on Friday evening and ended up hurling six and a third innings of six hit 2 earned run ball while setting down eight on strikes. The Golden Tide than looked to Joel Portz at noon on Saturday for the first of the double header. Portz exceeded all expectations by going eight innings of shutout baseball and retiring eight Dawg batters on strikes putting on a jaw dropping show at Royal Athletic Park.

Also notable was Haldon Craig out of the bullpen on Friday night. Haldon surrendered a solo home run to Prairie’s lead off man, Josh Kabayama, but apart from that went two and two third clean innings while striking out four to close the game for the Golden Tide. 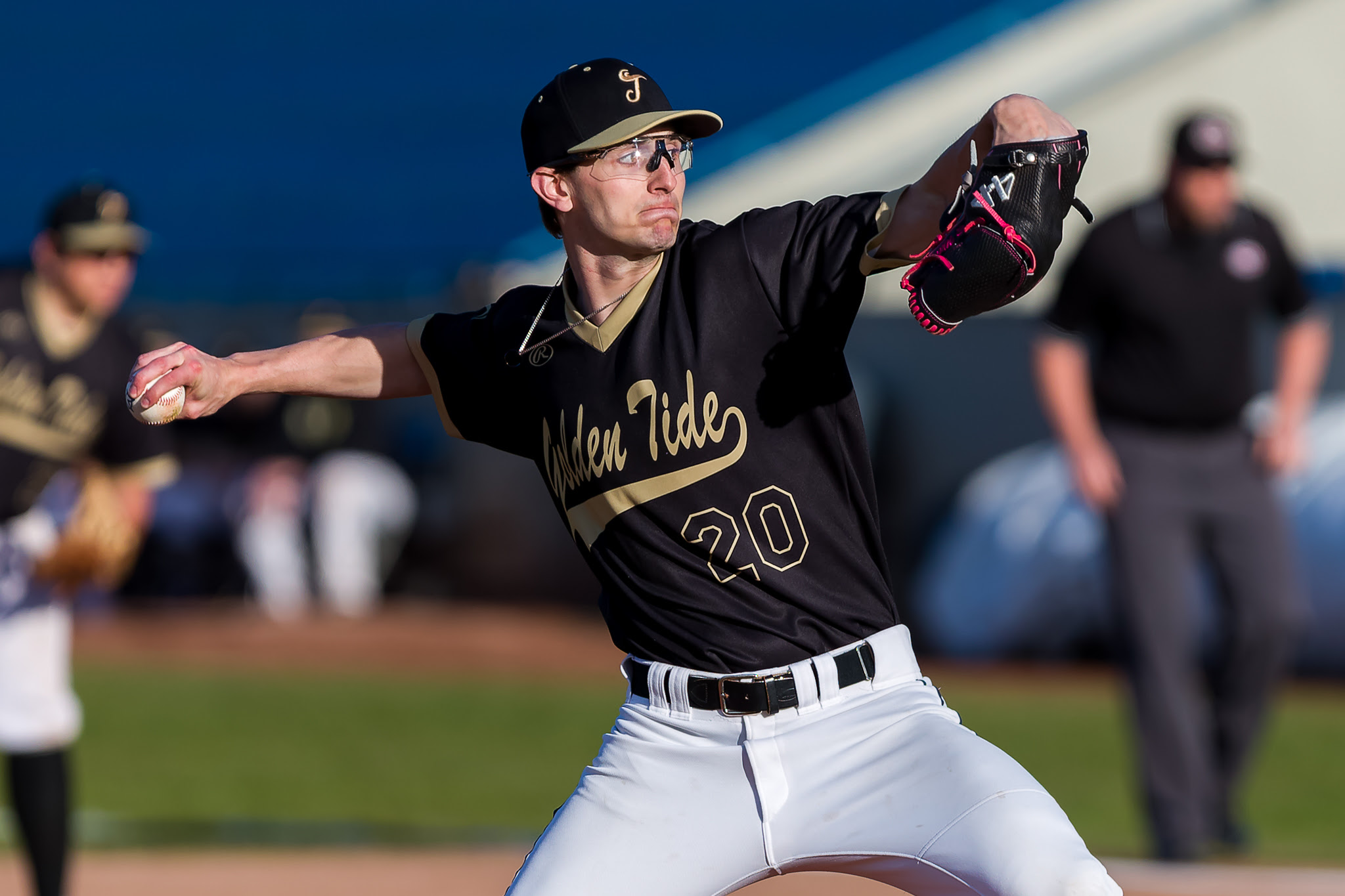 Brady Wilson throws a pitch during his win over the Prairie Academy Dawgs (Photo: Christian J. Stewart)
Joel Portz may have been the story of Saturday afternoon, but it would be criminal to not mentioned Daniel Sawchyn’s three run double in the eighth inning of that same game pushing the Golden Tide’s lead to five, and giving his squad some much needed breathing room that undoubtedly played a role in the games smooth finish. Sawchyn ended up with a very nice series as Victoria’s centre fielder closed out the weekend with five hits (three of which went for extra bases) in 11 plate appearances and racking up six runs batted in. 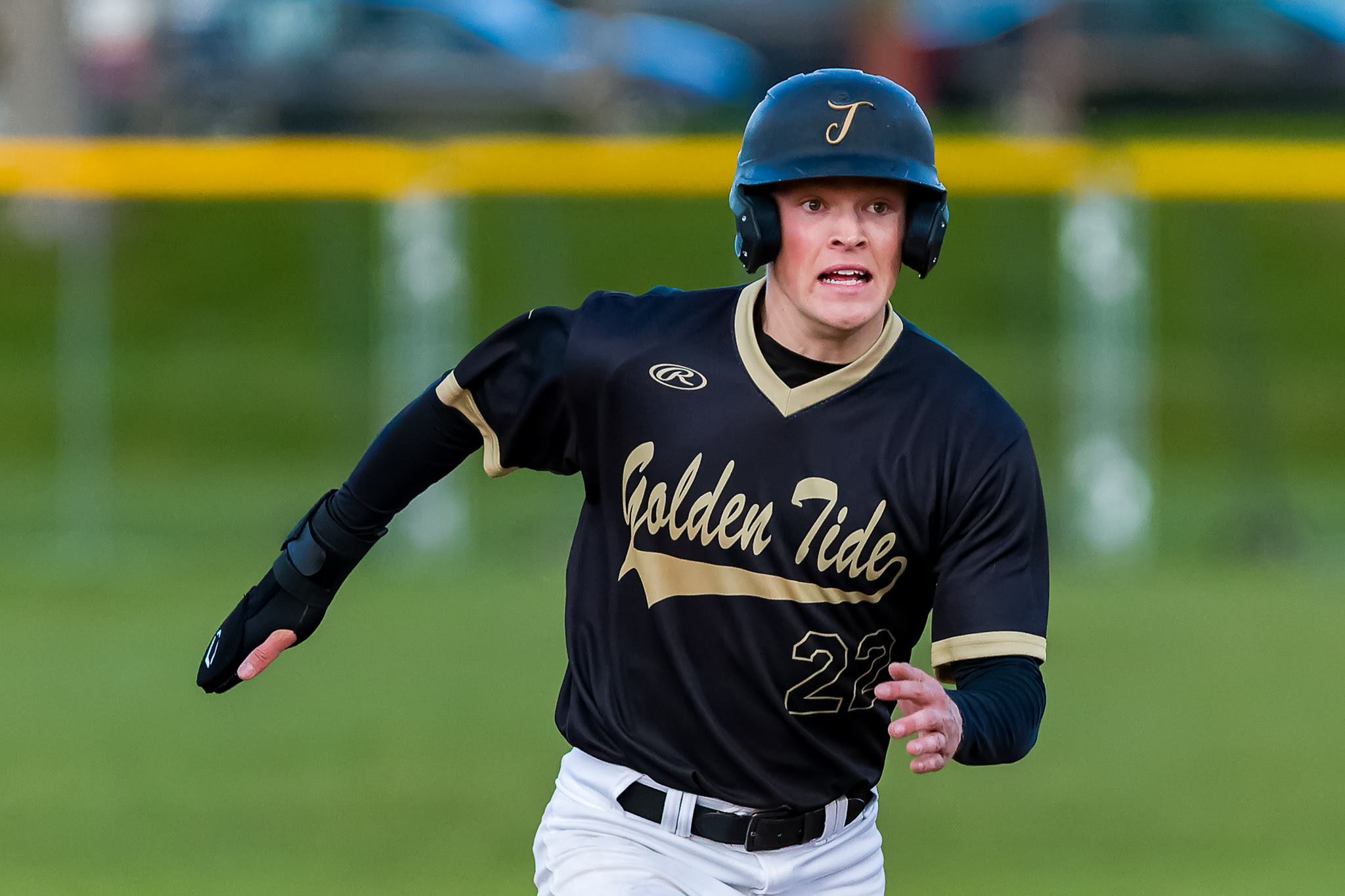 Although Prairie Academy was held in check for the first two games of the series, they refused to be shut down for the entirety of a weekend. The bats came alive early and often in the final two games of the series seeing as they scored more than six runs in the first three innings of both games while finishing those games with a combined 27 runs scored. An eye bulging output for any team at any level of baseball. 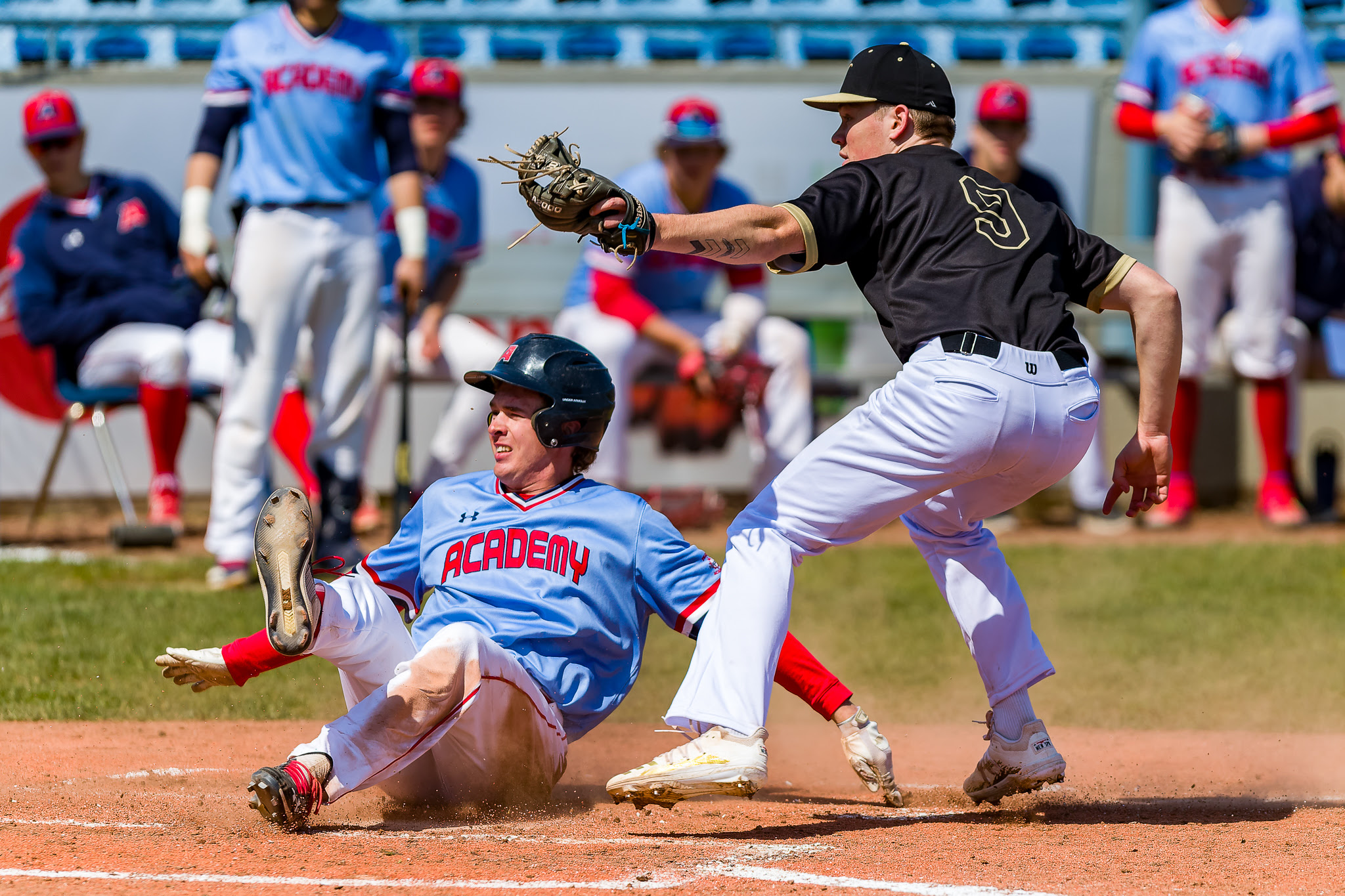 On Saturday afternoon, during the second game of the double header, it was Ty Schaffer who achieved the win on the bump for the Dawgs with his strong six inning, three hit and two earned run performance. Schaffer would strike out seven Victoria players but did offer up five free passes. Schaffer remained calm and cool with the Golden Tide threatening, working out of trouble on multiple occasions included stranding the bases loaded twice. 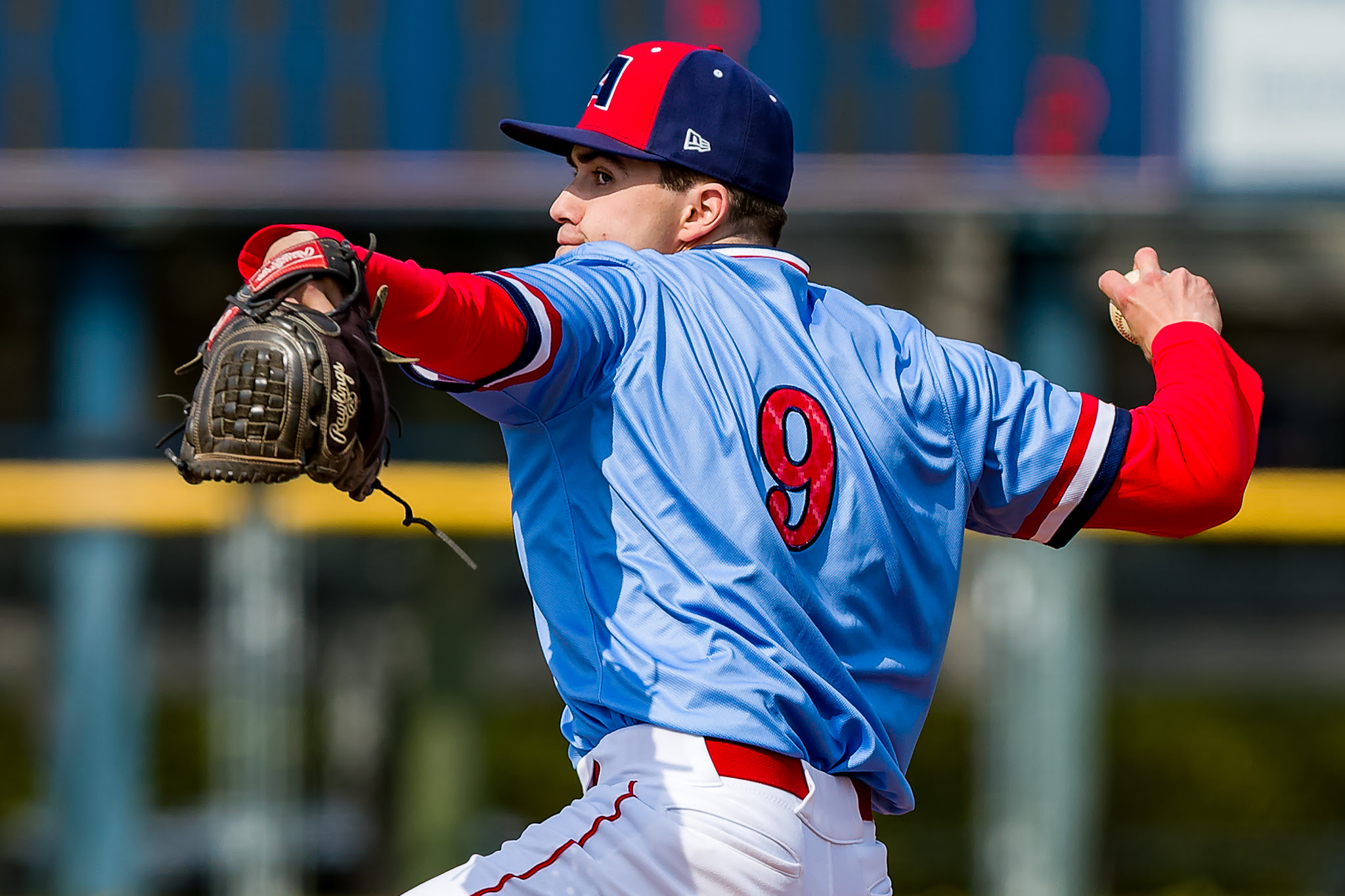 Owen Nychyk was one of the main contributors for the Dawgs this weekend especially in the second game of Saturday afternoon where he went three for six with a round tripper, a double and three runs batted in. The pride of Winnipeg, Manitoba would also add another hit on Sunday morning.

Centre fielder, Josh Kabayama, was also a big bat for Prairie Academy mostly during their 13-6 victory during the series finale where he had two hits and scored three runs while working a walk. Kabayama, Prairie’s lead off man, ended the series with; four hits, a home run, seven runs scored and two walks. Josh has been a big bat in the line up all year for the Lethbridge, Alberta squad and has now raised his batting average up to a whopping .368. 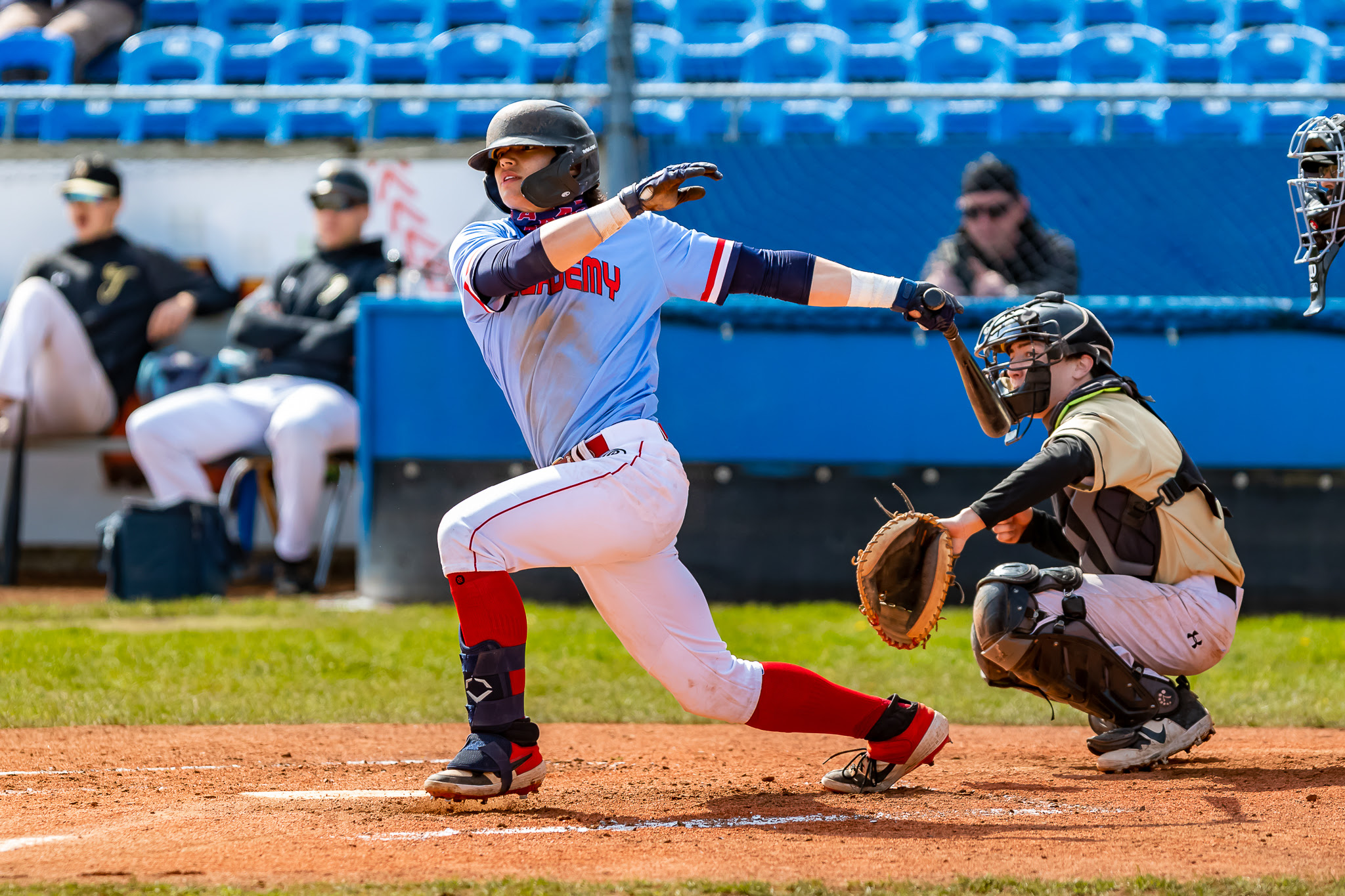 Josh Kabayama gets one of his two hits on Sunday morning (Photo: Christian J Stewart)

The Golden Tide will aim to bounce back after losing the final two games of this series when they play host to first placed Okanagan College, who are eight and two in their last ten games. Victoria now holds a six and five record, good enough to place them third in the CCBC during their first year in the league.

Game time for the first game on Friday evening, April 29th is 6:ooPM, while a double header on Saturday April 30th begins at 12 Noon.  The teams will then wrap up their four game series with a single game starting at 12 Noon on Sunday, May 1st.