Team BC is ready to take on the best athletes in the country at the 2019 Canada Winter Games which open in Red Deer on February 15. 251 athletes, 46 coaches, 29 managers and technical support staff, and 23 mission staff make up Team BC and will proudly represent British Columbia at the Games. Competition will take place in 21 sports against teams from Canada’s 13 provinces and territories. 55 per cent of the Team BC athletes and coaches have previously competed at the BC Winter or BC Summer Games bringing with them valuable multi-sport Games experience.

Leading Team BC into the Opening Ceremony in Red Deer was Fin Williams (North Vancouver) of men’s hockey. Williams was drafted 54th overall in the 2018 Western Hockey League entry draft. He is currently the assistant captain for his Burnaby Winter Club Academy Midget Prep team. An honour roll student, he also volunteers at Covenant House helping organize donations for kids at risk in Vancouver.

Many high-level athletes have launched their athletic careers through the BC Games and Team BC. At the 2018 Olympic and Paralympic Games, 19 Team BC alumni were part of Team Canada. 2018 Olympic medallist in bobsleigh, Justin Kripps (Summerland), is the Honourary Captain for Team BC for these Games and is an alumnus of the 2005 Canada Summer Games.

Quotes:
Jennifer Scott, Team BC – Chef de Mission
“It is a privilege to lead Team BC for the 2019 Canada Winter Games in Red Deer. These Games celebrate the importance of sport to Canadian culture and showcase our best up and coming athletes. I’m excited to watch some of our future Paralympians and Olympians perform over the next two weeks.”

Fin Williams, Team BC – Opening Ceremony Flag Bearer
“This is a special event for me. I’ve really wanted to make this team for a long time. It means a lot to me and my family. It’s an event that’s bigger than hockey.”

Justin Kripps, Team BC Honourary Captain
“Competing for Team BC at the Canada Games was the biggest event I had been to at that point in my career. The Canada Games is the experience of a lifetime. It is amazing.” 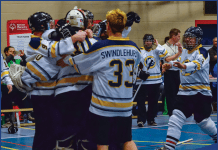