The Eves of Destruction A-Team will be taking the track at Archie Browning Sports Centre on Saturday, April 6, for the first ever Capital City Chaos Tournament. This mini-tournament will be a triple-header event featuring some tough competition. Action starts in the afternoon with the Sitka Sound Slayers (ranked #151) vs Emerald City All Stars (#170) at 2:30pm; the Eves of Destruction A-Team (#201) will play both teams at 5pm and 7:30pm respectively. All games will be WFTDA sanctioned.

The A-Team is currently 2-2 on the season, their first as a full WFTDA team. Being able to attract high level derby teams to Victoria is a huge achievement for the league, which has been working hard to make this tournament a reality. Coach Pfury S Pfaff says:

“Both teams are going to be fierce opponents that will test our training and athleticism. We are expecting lots of big hits and smart strategy from them. It’s going to be exciting to see how we stack up against this level of competition.”

The A-Team roster has a solid core of veterans who have been skating with the charter team for at least a season, including a deep jammer rotation. Miss Andry is making their A-Team debut, following their addition to the charter in March. Violet Criminal, Dar the Star and Margaret Smackwood, who were added to the roster in the off-season, will also be making their home track debuts with the A-Team.

Doors for the games open at 2pm, and tickets are good for all three games (including re-entry). The Spinnakers Beer Garden will open at 5pm (two pieces of ID required). Tickets are available for $10 in advance from ticketrocket.co, Logan’s Pub, Hive Hair, and Esquimalt Parks & Rec. Door tickets are $15 at the event.

The Eves of Destruction Roller Derby League, a member of the Women’s Flat Track Derby Association, was formed in 2006, has over 70 players, refs, and officials, and features five teams. Adult members play for The A-Team, The Belles of the Brawl, The Margarita Villains and The Hard Cores. The league also has two gender-inclusive junior teams, The Rotten Apples, made up of players aged 10-18, and the Seeds of Destruction, for kids under 10. 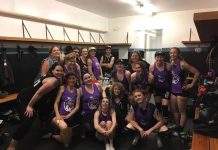 Big LeBOUTski Tournament Proves Eves A Team Is On Track