Two prospects from the Vancouver Giants 2018. WHL Bantam Draft class are off to Calgary to participate in Hockey Canada’s National U-17 Summer Development Camp from July 19 – 26 at Markin MacPhail Centre at WinSport’s Canada Olympic Park. This will mark the first appearance with Hockey Canada for both individuals. Altogether 112 players were invited to attend the event.

Zack Ostapchuk (St. Albert, AB) was originally selected by the Giants with the 12th overall pick in the 2018 WHL Bantam Draft. The 6’3”, 187-pound forward is coming off a season where he scored 13 goals and added 15 assists for 28 points in 31 games with the Nothern Alberta Xtreme Midget Prep program. As an under-ager, Ostapchuk suited up in six regular season games for the Giants in 2018-19 and was in uniform for two playoff games as well.

Drew Sim was the next pick for the G-Men in 2018. The 6’2”, 201-pound goaltender from Tees, AB was selected in the third round (46th overall) and was the second goaltender taken in the 2018 WHL Bantam Draft. This season with the Delta Academy Midget Prep program, Sim finished with a record of 7-5 with a 3.78 goals-against-average and an .885 save percentage.

Both Ostapchuk and Sim represented Alberta in the 2019 Canada Winter Games which were held in Red Deer. Alberta captured the Bronze medal at that event.

During the week-long camp, the players – 12 goaltenders, 36 defencemen and 64 forwards – will be split into six teams for on- and off-ice training, fitness testing, intrasquad games and classroom studies.

Following camp, players will be monitored through the early weeks of the 2019-20 season before 66 are named to one of three Canadian teams – Team Canada Black, Team Canada Red and Team Canada White – competing at the 2019 World Under-17 Hockey Challenge, scheduled for Nov. 2-9 in Medicine Hat, Alta., and Swift Current, Sask. 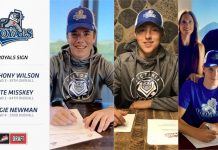