A day of twists and turns saw England and USA both come from behind to beat France and Canada respectively by a combined four points on day four of the Women’s Rugby Super Series 2019 in San Diego.

The action could not have been closer on day four of the Women’s Rugby Super Series 2019 as England and the USA won by just four points combined.

In the day’s opening match at the Chula Vista Training Center, the Red Roses once again came from behind to beat France 20-18 and ensure they head into their meeting with New Zealand on Sunday top of the standings – a match that will not only decide the champions but also who sits top of the World Rugby Women’s Rankings.

Having watched England’s remarkable comeback in San Diego, the hosts set about replicating it as two tries in the final 19 minutes gave them a hard-fought victory by the same scoreline over Canada.

Emily Scarratt scored 15 points as England overturned another half-time deficit to seal a 20-18 win over France and set-up a winner-takes-all meeting with New Zealand on Sunday.

Les Bleues came into round four on the back of only a second ever win over the Black Ferns, and were clearly full of confidence as they raced into a second-minute lead.

Lydia Thompson was unable to collect a wayward pass inside her own 22 and England’s mistake was punished by Cyrielle Banet, who collected Camille Imart’s cross-field kick to score in the right corner.

World Rugby Women’s Player of the Year 2018 Jessy Tremoulière was unable to add the conversion and after Amber Reed was held up on the line, England levelled as Kelly Smith (pictured right) exploited space on the blindside of an attacking scrum to dot down in the left corner. Scarratt, though, missed her conversion.

France retook the lead in the 23rd minute when captain Gaelle Hermet picked up from the base of a scrum and fed Caroline Boujard, who produced a stunning finish on the left wing.

Tremoulière added the conversion and, after Scarratt had missed a presentable kick at goal, two penalties from the France full-back stretched Les Bleues’ lead to 18-5 at half-time.

For the second game in succession England needed a huge effort after the break, and the Red Roses narrowed the deficit in the 50th minute as Boujard diverted a Zoe Harrison cross-field kick into the path of Scarratt, who touched down.

The England centre missed the conversion and although France lost Elise Pignot to injury shortly afterwards, Les Bleues retained an eight-point advantage heading into the final quarter of an hour in San Diego.

But it was England, and Scarratt, who had the last laugh. The Loughborough Lightning centre rose between two blue shirts in the 69th minute to claim another Harrison cross-field kick and touch down a score she converted.

And just three minutes later Scarratt stepped up to convert the penalty that secure victory and keeps the Red Roses top of the Super Series table.

“At half-time we were little bit frustrated at the scoreline because we hadn’t played that badly,” Scarratt said. “It was about not getting too low on ourselves because of the scoreline.”

Two tries in the final 20 minutes gave the USA a first Super Series win of 2019 as Canada let a 10-point half-time lead slip at the Chula Vista Training Center.

Having suffered an agonising 19-17 defeat to England last time out, Canada began in determined mood against their North American rivals.

Less than five minutes were on the clock when Olivia DeMerchant powered over from close range, and after consultation with the TMO, the try – converted by number eight Sophie de Goede – was awarded.

USA full-back Alev Kelter reduced the hosts’ arrears with a penalty before prop DeMerchant produced another emphatic finish in the 15th minute to give Canada a 12-3 lead.

De Goede then stretched Canada’s advantage with a penalty of her own, before a Rachel Johnson turnover set in motion a flowing USA move that ended with Emily Henrich powering over to bring the Women’s Eagles back within a score.

Kelter missed the conversion, however, and Canada restored their two-score lead before half-time as De Goede stroked over another penalty.

The hosts had been out-muscled up front during a first half that Canada dominated, but it was the USA who commanded the set-piece after the break.

Although the Women’s Eagles were much improved in the second half, it took a couple of moments of magic to breach the Canadian try-line.

With less than 19 minutes remaining sevens star Kelter showed off the full range of her skills as she picked up possession 10 metres into Canada’s half before displaying enviable pace, power and footwork to score under the posts.

Her conversion brought the hosts within three points, and as the game ticked into its final 10 minutes that deficit was turned into an advantage as the jet-heeled Kris Thomas, another sevens star, latched onto a Katana Howard cross-field kick to touch down in the right corner.

Kelter missed a tough touchline conversion but it mattered not as the hosts saw out victory, ensuring their rivals signed off from this year’s tournament in defeat.

“The excitement was just tangible, we could feel the energy going into the game actually, in warm ups even,” said try-scorer Heinrich. “We were all talking about it and it just kept our nerves calm. It’s amazing to win, especially against Canada who is such a talented team. It’s been nice, it was the build-up of the past two games going into this one to get the victory.”

Canada number eight De Goede added: “We’re really disappointed to finish this on a loss. We came here to play our best rugby and I don’t think we did that today.” 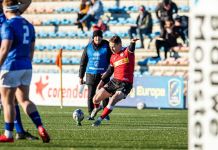