Both Ivanie Blondin and Jordan Belchos were victorious in the Mass Start at the ISU World Cup Speed Skating in Nagano, Japan on Friday. It’s the first-ever gold for a Canadian man in the event and the first time the men’s and ladies’ Mass Start podiums have both featured a Canadian at the same competition.

Belchos (Toronto, Ont.) broke away from the pack of 16 skaters with three laps remaining and never looked back. He crossed the line in a time of 7:53.990, with 61 sprint points and a historic medal for Canada. Rounding out the podium were Joey Mantia of the US and Belgian Bart Swings, both ranked at the top of the World Cup standings in the discipline.

It was the second Mass Start win for Belchos on Friday, having won his semi-final earlier in the day. Antoine Gélinas-Beaulieu (Sherbrooke, Que.) also participated in the first Mass Start of his World Cup career, earning a spot in the final and finishing 14th.

Ottawa’s Blondin fought her way through a crowded race and won the sprint on the final straight to finish ahead of Nana Takagi of Japan and American Mia Kilburg-Manganello. She captured her second gold and third consecutive medal in the Mass Start this season with a time of 8:26.440 and 61 sprint points, retaining her position atop the World Cup ranking.

In the final event of the day, Alex Boisvert-Lacroix (Sherbrooke, Que.), Tyson Langelaar (Winnipeg, Man.) and David La Rue (Saint-Lambert, Que.) earned a bronze medal in the men’s Team Sprint. Sitting in third after their pairing with a time of 1:20.979, none of the remaining teams were able to top the Canadians, or the teams from Russia and Japan who finished with the gold and silver medals.

The World Cup in Nagano continues on Saturday with the second men’s 500m and the team pursuit, as well as the ladies 1000m and 3000m. Races will be streamed live on CBC Sports beginning at 2:05 am ET.

“The Mass Start is a race where it’s so hard to predict what’s going to happen, so I try to go in with a bit of a plan and stick to it. My plan today was to be patient and wait for the right moment to make an attack. I got away and just held on until the finish. I always think it’s cool to be on the podium with guys who you respect a lot, so standing with Bart [Swings] and Joey [Mantia] was special.”

– Jordan Belchos
“I was really confident out there and felt like today was going to be a good day. Coming off last weekend, it’s hard to not be confident and I carried that through to a great race today. The girls were fighting a lot behind me, but the pressure was off a little bit knowing that one of the top contenders [Irene Schouten] wasn’t in the mix.”
– Ivanie Blondin
“Today we skated with a completely new team, as Tyson was substituted at the last minute. The lineup was a success and we had a great race. I had to slow down a bit at the start to help Tyson get used to the sprinting, but in the end our execution was very well done. Without a doubt, we are happy with this bronze medal.”
– Alex Boisvert-Lacroix 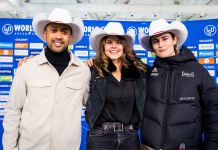 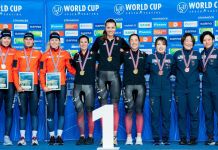 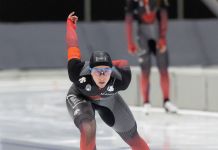