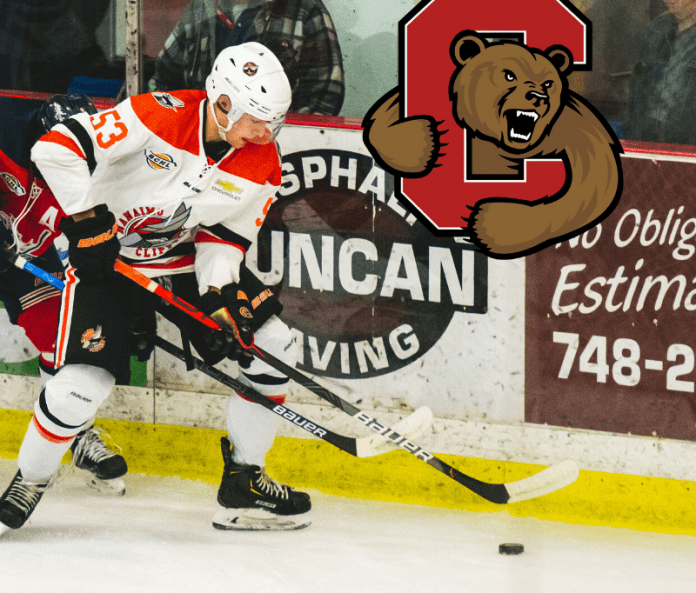 Jack O’Brien, the only 2003 born player on the Nanaimo Clippers, has secured his path to the NCAA Division 1 , committing to Cornell University for the 2022-2023 season.

As a 16 year old, O’Brien is the youngest Clipper this season, yet he has been a mainstay on a Clippers’ defence core that currently has allowed the 2nd fewest goals against in the BCHL. He has taken on a defensive role and has shown incredible poise and maturity that one would expect from a 19-20 year-old veteran defenceman.

Darren Naylor, Vice President and Head Coach of the Clippers, is very impressed with O’Brien. He noted, “Jack is a throwback type defenceman whose first objective is to take care of his own end. He is extremely calm and rarely makes a poor decision. Jack is a natural leader and mature beyond his years. This is a first of what will be many accolades for Jack moving forward including a future high NHL draft pick.”

Jack O’Brien commented, “Cornell University approached me back in February even before I was on the Clippers. I was extremely interested at the time. They wanted to watch me play in my first season in the BCHL and fortunately, this season has gone well so they offered up a commitment.  There is no way I could pass up on this offer as Cornell is known for its top end academic and athletic opportunities. I am extremely excited for the future.”

With the commitment, Jack O’Brien joins 8 other Clippers that have punched their ticket to the NCAA Division 1 to further pursue their hockey and academic dreams.