The Penticton Vees Junior ‘A’ Hockey Club is pleased to announce forward Darwin Lakoduk (’00) has committed to the American International College (AIC) Yellow Jackets for the 2021/22 season.

Lakoduk, 19, is in his first season with the Vees after being acquired from the Victoria Grizzlies in mid-November. The 5’10”, 167-pound forward has played in 47 games throughout the 2019/20 season, scoring 8 goals and adding 11 assists for 19 points split between Penticton and Victoria.

The Edmonton, Alberta native has compiled 103 career regular season games of BCHL experience, tallying 14 goals and 18 assists for 32 points while playing in 14 career playoff games. Lakoduk is set to join Vees teammate Nico Somerville at AIC and is the 15th Vee to possess a commitment to an NCAA Division I school.

“Since bantam age it has been my long-term goal to play Division 1 hockey,” commented Lakoduk, “I am excited to commit to AIC for the 2021/22 season. They have an excellent program where I look forward to continuing my hockey career and schooling. A special thanks to my family, teammates and the Penticton Vees for all their support.”

“I am very pleased for Darwin to have secured this NCAA opportunity,” said Vees President, General Manager and Head Coach Fred Harbinson, “Since arriving in Penticton, Darwin has consistently looked to improve his game and has brought an outstanding attitude that is absorbed by teammates.”

American International College is located in Springfield, Massachusetts and play their games out of the MassMutual Center. The Head Coach of the Yellow Jackets is Eric Lang, who has been at the helm of AIC since the 2016/17 season, posting a 57-64-14 record and reaching the NCAA Tournament for the first time in school history during the 2018/19 campaign.

The Vees will look to earn their fifth win in a row as they head out for their final road game of the season in a matchup against the West Kelowna Warriors on Tuesday night. 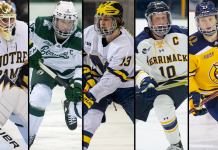