January 26, 2020   Colwood, BC  ( ISN )  – The Premier division Westshore RFC men’s squad added their third win of the season with an inspired 8-3 victory over the  James Bay Bays Saturday afternoon at Juan de Fuca field in Colwood, BC.

With the win, the 10thplace Westshore RFC look to climb up the log-jammed standings in the BC Rugby Union where four teams, three of which are Victoria teams, all are vying for sixth spot half way through the season, including the side from James Bay.

Both sides would rely on a strong defensive match, neither team able to find the try line in the first half of play.  Westshore would do well to take the first half advantage in the game, capitalizing on a James Bay penalty, kicking through the sticks from close range to take an early 3-0 to lead the way into half time.

Leading by the slimmest of margins, Westshore’s Peyton Eagar would dot down the ball for the game’s only try of the game scoring in the second half to take a 8-0 lead.  James Bay, wise to take what was given in an otherwise tightly-guarded game, would be afforded a penalty kick to erase their doughnut from the scoresheet with time still remaining and an 8-3 score.

James Bay would challenge Westshore’s lead late in the game from approximately 10 yards out with a ball in hand scrum possession, however a strong Westshore front row would push the James Bay scrum back, turning the ball over to the home side and the eventual victory.

In earlier action, Westshore’s Premier Reserve’s would defeat James Bay 29-22 to lift the Colwood team into fifth place in their division. 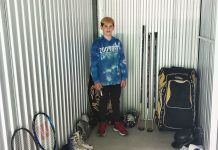