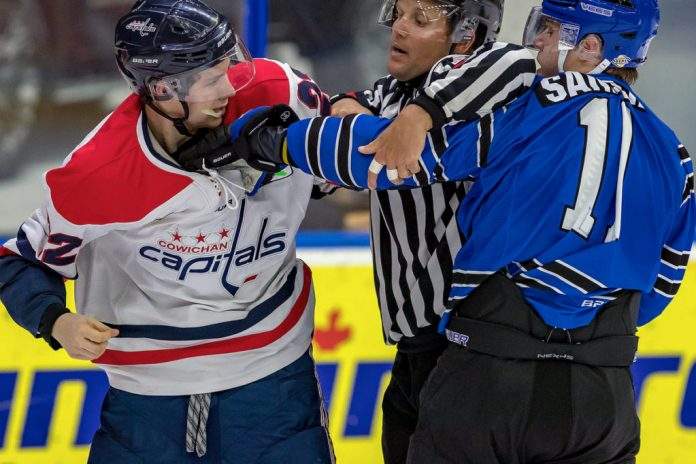 After a vote from the 17 BCHL broadcasters, today the league announced the First and Second-Team All-Stars as well as the All-Rookie Team.

Winner of the Brett Hull Trophy as the league’s leading scorer and a finalist for league MVP, Johnson is just the second player since 2015-16 to eclipse the 100-point plateau. The 17-year old from Port Moody, B.C. led the league in both goals and assists and finished 30 points ahead of the BCHL’s second-leading scorer. Johnson, who is committed to the University of Michigan next year, had 32 mutli-point games during the season, including six with four or more. His best performance came in a six-point night on Nov. 27 against the Merritt Centennials.

After finishing the regular season on a 15-game point streak where he produced 26 points, tied for the longest streak in the league this year, Tellier climbed all the way to second in league scoring with 71 points and his 43 assists were second only to Johnson. The Sherbrooke, Que. native exceled for the Eagles this year, more than doubling his point totals from the previous year where he played for the Wenatchee Wild. Tellier’s biggest output came in the first game of his 15-game streak when he had a goal and four assists against the West Kelowna Warriors. He is committed to Quinnipiac University next season.

Entering the season, O’Brien carried possibly the most hype out of any BCHL player and he certainly did not disappoint. Despite missing 12 games due to injury, the 2018 first-round draft pick of the Philadelphia Flyers finished tied for fourth in league scoring with 66 points and had the third-best points-per-game mark at 1.43. O’Brien, who spent last season at Providence College and also played for Team USA at the 2019 World Junior Hockey Championships, found a home in Penticton while spending a year away from the NCAA after transferring to Boston University. The 20-year-old from Hingham, Mass. notched four points in four separate games this year and ended the year with points in 10 straight contests.

The four-year BCHL veteran broke out offensively this season, leading the league in points by defencemen with 51 and finished tied for the third-most assists among all skaters with 42. Hirose, from Sicamous, B.C., had the third-longest point streak in the BCHL this year when he racked up 19 points in 14 games in October and November. The 20-year-old tallied three points in a single game on four occasions over the season en route to putting up 19 more points than his previous best total from 2017-18. Hirose is up for the league’s Top Defenceman Award and is committed to Minnesota State University next season.

Mikrogiannakis took off in his second BCHL season, finishing just three points back of the defencemen scoring lead with 46 points. The Rochester Institute of Technology (RIT) commit was a steady presence in both ends for the Capitals this year, leading the team in assists and finishing second in team scoring. Mikrogiannakis’ biggest performance this year came in a Dec. 8 game against the Salmon Arm Silverbacks where he had a goal and three assists. The Aurora, Ont. native is a finalist for the league’s Most Valuable Player as well as the Top Defenceman.

It was a historic season for Stevenson as he etched his name in the BCHL record books by posting the second-highest single-season save percentage all-time with a mark of .936 and his 1.77 goals-against average was also the second-best in league history. The 20-year-old from Chilliwack, B.C. also tied for the league-lead in wins and his four shutouts were tied for third-most in the league. From mid-October to January, Stevenson won 19 straight starts, helping the Express to their best regular season in franchise history and the Ron Boileau Trophy for the league’s best regular-season team. His best performance of the season may have been his first as he made 37 saves in a shutout victory over the Surrey Eagles on Sept. 13. Stevenson will attend Dartmouth College next season.

Lapointe missed over 20 games this season, mostly due to injury, and didn’t play his first game until late October, but still managed to break into the top-20 in league scoring with 55 points in just 36 games. The Smoke Eaters captain had an immediate impact on the team when he finally got his season going, getting at least a point in 20 of his first 22 games and ending up with the second-highest points-per game at 1.53 per contest. The Michigan commit’s best night of the season came in a Nov. 27 win over the Merritt Centennials where he had a hat trick and two assists.

Ozar finished the season in a tie for fourth in league scoring with 66 points, 40 points better than his rookie total of 26 last season. The 19-year-old started his season on a high note when he committed to the University of Denver right before the start of the year and kept on rolling into the regular season, forming a deadly combination with linemate Phlippe Lapointe. Ozar recorded 20 multi-point efforts over the year, including five three-point nights, highlighted by a hat-trick performance Jan. 4 against the Merritt Centennials.

The Granby, Que. native led the league-leading Express in points and tied for ninth in league scoring, while his 29 goals were tied for third-most in the BCHL and five of which were game-winners. Lapointe started the year relatively slowly, but caught fire as the season went on, notching 42 of his points in his final 32 games. His most productive night this year came in a one-goal three-assist performance Feb. 4 against the Alberni Valley Bulldogs.

Livingstone, who is a finalist for the league’s Top Defenceman Award, has continued to impress in his fourth and final season in the BCHL. A veteran of 185 regular-season games, the Creston, B.C. native put up the best offensive numbers of his career in 2019-20, posting the second-most points among all blueliners in the league with 49. Livingstone also led all BCHL defencemen with nine power-play goals and 32 points with the man advantage. The Minnesota State commit had an eight-game point streak in October, but his most productive game of the year came on Sept. 13 when he had four assists against the West Kelowna Warriors.

The Express captain became a key cog in Coquitlam’s arsenal in his second season in the league, combining stellar defensive play with timely offensive contributions. Cooper’s 35 points tie him for ninth in scoring among BCHL defencemen and his 10 goals tie him for third. His offensive highlight this year came in early February when he registered seven points in three games, including back-to-back three-point efforts, and was named the BCHL Player of the Week, becoming the first defenceman this year to take the honour. Cooper is committed to Ferris State University.

It was an incredible first season for Terness. After the Smoke Eaters struggled through the first weeks of the season, Terness turned things around along with the rest of the squad. After going winless in his first four appearances, the 17-year-old from Burnaby, B.C. reeled off six straight wins, giving up more than one goal once during that stretch. Terness also recorded another six-game winning streak in December and January and finished the season with a .932 save percentage, good enough for third in the league and eighth-best in BCHL history for a single season.

Lapointe’s second appearance as an All-Star selection as he was also named to the Second-Team, the 18-year-old forward led all BCHL rookies in scoring last season with 29 goals and 60 points. Lapointe registered multiple points in 16 of his 56 games this year, including six where he had multiple goals. His most consistent stretch came in December and early January when he had 13 points over a nine-game point streak. Lapointe is committed to St. Lawrence University.

At over a point-per-game, Monds finished one point back of the rookie scoring lead with 59 points and his 37 assists were the most among all rookies. The Providence College commit also led the Grizzlies in scoring by a wide margin. Monds registered 25 of his points this year on the power play which also ties him for first among rookies. The Brockville, Ont. native put together a 10-game point streak in November and December and totaled 20 points over that stretch. It was the longest rookie streak this year. Monds’ highlight performance this year came in a Jan. 5 game where he put up two goals and two assists in a 4-3 win over the Surrey Eagles.

After playing in a handful of games as an affiliate with the Surrey Eagles last season, Evans arrived in the BCHL for good this year. The 17-year-old started the year with two points in his first 13 games, but quickly expanded his role on the team and began scoring like a top-tier forward. Evans had a point in 14 of his last 15 games and capped things off with a hat trick in his final game of the regular season, his second three-point effort of the year. Despite his slow start, Evans finished fourth in rookie scoring with 50 points and tied for third in goals with 22.

The product of Cos Cob, Conn. stepped into the BCHL this year and had a huge impact as one of the top defencemen in the league. Moore led all rookie defencemen with 12 goals on the season as well as power-play goals with seven. He also led the Chiefs in goals, assists and points from the blueline. Moore, who was drafted by the Detroit Red Wings in the fifth round of the 2019 NHL Entry Draft, is committed to the University of North Dakota next season.

Ardanaz burst onto the scene this year as a 17-year-old with the Warriors and put together an impressive rookie campaign. He finished the season with 32 points, fourth-best among rookie defenceman, and his 28 assists were second-most for first-year blueliners. Ardanaz has enjoyed his fair share of on-ice success this year, but he was also recognized for his work off the ice and in the classroom as he was named the BCHL’s High School Player of the Month for December. The Langley, B.C. native has turned it on offensively over the back half of the season, registering 20 of his 32 points after the start of December. Ardanaz is committed to the University of New Hampshire.

Another player appearing here a second time as he was also named to the Second-Team All-Stars, Terness led rookie goalies in nearly every major statistical category, including save percentage (.932), goals-against average (2.36) and wins (27). His marquee performance this season was his first-career BCHL shutout which he earned by making 28 saves in a victory over the Alberni Valley Bulldogs on Feb. 14.

NOTE: Rookie voting is limited to players born in 2001 or younger