The Vikes Basketball teams, with a big boost from Vikes Senior Athletic Director Clint Hamilton and Vikes fan Scott Lake, raised a record $15,100 for Shoot for the Cure, a national U SPORTS initiative to support the Canadian Cancer Society.

Shoot for the Cure could not be celebrated in front of fans this year, but plenty of baskets were made on Ken & Kathy Shields Court at CARSA.

To help raise funds and stoke everyone’s competitive spirit, the Vikes Women’s Basketball team were challenged to a free throw competition by Clint and Scott. If the Vikes team won, Clint and Scott would double their donation.

After 100 free throws, it was a tie. In a shooting contest, Clint versus the two highest percentage shooters of the day, Hannah Walline and Tana Pankratz, would decide it. Clint was further challenged to run full court sprint against Mimi Sigue. The Vikes prevailed, and over $15,000 was collectively raised for Shoot for the Cure, the highest amount ever by the program.

“It was wonderful to see our varsity Vikes come together in supporting Shoot for the Cure,” said Clint Hamilton. “This is an important annual tradition, which was embraced as a way to support and honour Vikes coaching legend Kathy Shields, and in a year when our traditional game environment was not available, it was great to be challenged by the team and truly ‘shoot’ to generate financial support for Breast Cancer research.” 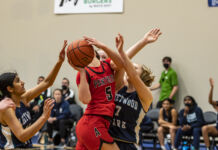