November 27, 2021  Victoria, B.C.  – The Camosun Chargers men’s and women’s volleyball teams welcomed the Douglas College Royals for a pair of games over the weekend.

On Saturday, the women’s volleyball team got down early to the Royals 2-0, but found their way to come out on top of the third set, but Douglas College took the match in four.Correina McNeice (Caledonia Secondary/Terrace, BC) picked up 35 digs, while Mika Yamada Rifu High/Sendai, JP) added 24 assists, and Chantelle Dobie (Salmon Arm Secondary/Salmon Arm, BC) put up seven blocks. The Chargers are now 3-5 on the season.

On the men’s side, the two teams traded wins and forced a fifth set for the second night in a row. The Royals outscored the Chargers in the fifth set 15-11 to take the match. Kris La Guardia (Vancouver College/Vancouver, BC) laid out for 41 digs, Luke de Greef (Lambrick Park Secondary/Victoria, BC) put up 13 kills, and Kyle Butterworth (Okanagan Mission/Kelowna, BC) added 19 assists.

The Chargers are now entering the end of the semester break, and don’t return to the court until January, 15, 2022 when they host island rival Vancouver Island University (VIU) Mariners.

The full PACWEST schedule can be found on their website at www.pacwestbc.ca. All games are live-streamed on the PACWEST website.

The Camosun Chargers Athletics Program currently fields teams in basketball and volleyball. Since joining the Canadian Collegiate Athletics Association (CCAA) and PACWEST conferences in 1994, the Chargers have competed in over 100 national and provincial championships with over 50 medal winning finishes. 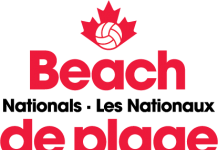 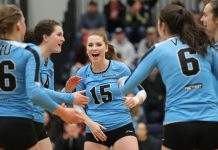 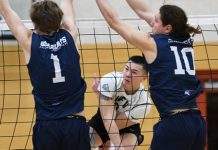