The Spartans will take on Brandon in the national final in a rematch of the Canada West championship, which the Bobcats took last weekend in a thrilling five-set match. The championship match is set for 1 p.m. (PT).

TWU will be targeting its sixth national crown and their fifth in the last nine years. An otherworldy run of dominance over the last decade has the Spartans set to play in their eighth national final in the last 10 years.

Eric Loeppky (Steinbach, Man.) led the Spartans as he was almost unstoppable in a performance for the ages that saw him earn 22 kills without committing a single attacking error and hitting .611 to go with six aces and three blocks.

For the Rouge et Or, Vicente Ignacio Parraguirre Villalobos led the offence with 21 kills, one ace and eight digs.

Sunday’s championship game with the Bobcats is a rematch of the 2011 national final, which the Spartans won in three sets on home court.

As a team, TWU hit better than .400 in four of the five sets and finished with a .394 hitting percentage while committing just 11 attacking errors all night.

The Spartans also finished with 12.5 blocks and 11 aces.

Conversely, Laval hit .278 as a team and had three blocks and five aces. The teams combined for 42 serving errors, with TWU committing 22 and the Rouge et Or committing 20.

The RSEQ champion Rouge et Or will try to get their hands on the bronze medal and earn their first podium finish since their last title in 2013, as they play the Alberta Golden Bears Sunday at 10 a.m. (PT.).

A close first set saw the Spartans hit .478 to win by three points, but the second frame set the table for a long match, with Laval securing a two-point win while hitting .520 and collecting 17 kills.

With momentum and a boisterous crowd in their corner, the Rouge et Or took the third set 25-19 while holding TWU to a match-low. 250 hitting percentage.

However, from there, TWU found its groove.

TWU committed just two attacking errors in the fourth and fifth sets combined and hit .438 to earn an eight-point fourth-set win and a nine-point victory in the final set.

“It was exactly what we thought it would be. Laval is one of the toughest teams to beat at home. No. 2 and 3 in the country – of course it’s going to go to five sets. This is what you dream of as a student-athlete, to get a chance to play in front of that many people, excited for or against you. The energy was just awesome. When the stakes are down and the match is on the line, guys like Eric (Loeppky) make their legacies in these moments. That might have been Eric’s best match for us.”

“We just weren’t able to get back to their level in the fourth (set) and were completely outplayed in the fifth. Our tournament continues and we have to give everything we have to win the bronze tomorrow.” 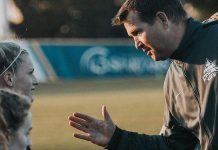 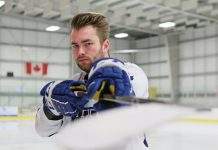