Scott, a prospect for the Toronto Maple Leafs, appeared in four games during the past week, picking up three wins over the Edmonton Oil Kings. He sported a 3-1-0-0 record, 2.00 goals-against average and stopped 115 of 123 shots for a .935 save percentage and one shutout.

After a 5-1 loss to the Edmonton Oil Kings on Tuesday, Scott and the Raiders bounced back with a 2-1 win on Wednesday. Stopping 25 shots, Scott was awarded the second star of the game.

Friday, Scott’s 24-save performance in a 4-0 win over the Oil Kings boosted the Raiders to a 3-2 advantage in their Eastern Conference Championship series. He stopped 13 shots in the first period, six shots in the second and five shots in the third period for the third star of the game and second star of the night in the WHL.

On Sunday, Scott stopped 32 of 34 shots in a 4-2 series-clinching win for the Raiders. Saving 10 shots in the first period, eight in the second and 14 in the third, Scott was awarded the third star of the night in the WHL.

Scott and the Raiders will be back in action for Game 1 of the 2019 Rogers WHL Championship Series against the Giants on Friday, May 3 (7:00 p.m. MT) at the Art Hauser Centre in Prince Albert, Sask. 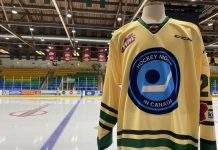