The Canadian Junior Hockey League (CJHL) released their final list of nominees for their year-end awards today and the BCHL is represented as a finalist for all six trophies.

Alex Newhook and Alexander Campbell of the Victoria Grizzlies, James Miller and Jack LaFontaine of the Penticton Vees and former Merritt Centennials head coach Joe Martin are all up for awards.

The award-winners will begin to be unveiled tomorrow and will wrap up with the CJHL MVP announcement next Wednesday, May 15.

Here is a closer look at the BCHL representatives and who they are up against.

The 18-year-old from St. John’s, N.L. led the BCHL in scoring by 18 points and clinched the first 100-point season since 2015-16 when he racked up eight points in a single game on the final weekend of the season to give him 102 on the year. His 64 assists were tops in the league this season and he finished third overall with 38 goals.

Last year’s BCHL Rookie of the Year, Newhook had two separate point streaks of 10 games or longer this season, his best stretch coming in the final 10 games of the regular-season where he totaled 28 points (13 goals, 15 assists).

Newhook won a bronze medal as an assistant captain for Team Canada West at the 2018 World Junior A Challenge and also participated in the 2019 CJHL Prospects Game in January. He is ranked at number 16 on NHL Central Scouting’s North American Skaters list and is expected to be a first-round pick at the 2019 NHL Entry Draft. He is committed to Boston College next season.

The 6-foot-2, 190-pound defenceman led the Vees in scoring this season with 62 points, making him the first Penticton blueliner to lead the team in scoring since the 2010-11 season. His 44 assists led all defencemen and were tied for the fourth-most in the league.

The third-year veteran was named the BCHL Player of the Month in November when he put up eight goals and 14 assists in 13 games. Miller had 18 different multi-point nights during the season, highlighted by a four-point effort in a 5-3 win over the Powell River Kings on Jan. 11.

He is committed to Northern Michigan University for the 2019-20 season.

The Mississauga, Ont. native was a workhorse for Penticton this year, appearing in 45 of his team’s 58 games. He finished second in the BCHL in most major goaltending categories, including save percentage with a mark of .923, goals-against average at 2.19 and wins with 30. He also added three shutouts.

LaFontaine, 21, had his best stretch of the season from Jan. 6 to Feb. 1 where he won eight straight starts, giving up more than two goals on only three occasions. He also recorded back-to-back shutouts on Sept. 29 and Oct. 5 in a pair of wins over the Alberni Valley Bulldogs and the Vernon Vipers.

He was drafted in the third round of the 2016 NHL Entry Draft by the Carolina Hurricanes and is committed to the University of Minnesota next season.

Campbell’s BCHL career couldn’t have gotten off to a better start as he had a hat trick in his first-ever game and never looked back from there. The Clarkson University commit finished one point back of the rookie scoring lead, ending the year with 67 points. His 46 assists were also tops among all first-year players.

The highlight of the season for the Chateauguay, Que. native came in a Nov. 28 game against the Coquitlam Express where he had two goals and three assists in a 10-6 come-from-behind win where his line combined for 19 points.

The 18-year-old was a part of the bronze-medal winning Team Canada West at the 2018 World Junior A Challenge and also participated in January’s CJHL Prospects Game. Campbell is ranked at number 42 on NHL Central Scouting’s North American Skaters list ahead of the 2019 NHL Entry Draft.

In his fourth year as head coach of the Centennials, Martin led the team to a 24-point improvement from the 2017-18 season, including 12 more wins, to finish in a tie for first place in the Interior Division. The offence flourished under his leadership this year, finishing second in the league with 220 goals for and a plus-38 goal differential. Merritt also scored the second-most power-play goals with 63 on the year. They finished the year with a 36-15-4-3 record and 79 points.

The Centennials are among the league leaders in players committed to NCAA Division I programs, currently with 10, including six that announced their commitments during the 2018-19 season.

Martin has been an assistant coach for Team Canada West at the World Junior A Challenge the last two years, winning gold in 2017 and bronze in 2018.

Since the end of the season, Martin has now taken a job with the Alberni Valley Bulldogs. 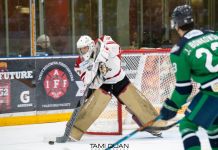 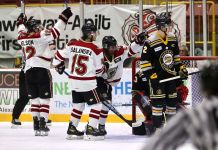