The Cougars got out to a slow start to their home opener against the Wolves on Thursday night. With Westshore all by dominating the first 10 minutes of the game. The Media Timeout was very advantageous to the home team, though. About 2 minutes after the break the Cougars, fresh off of a penalty kill, jumped out to a 2-0 lead. Matt Clark and Cam LeSergent scored 33 seconds apart.

The second period was an exciting affair. Both teams came out flying and hitting. A fast-paced and hard-hitting period only had newly named Wolves Captain Fontana collecting a goal. 2-1 after 2 with the Wolves trying to shift the momentum.

The final frame was more of the same, hard-hitting period. With Gillberg in the box, the Wolves PP finally clicked with Klassen tying the game at the 3-minute mark of the 3rd. The next 10 minutes of action looked like we could see OT in the first game of the year. Both keepers, Brett Anderson, and Dalan Marleau were outstanding for most of the game.

Then at 14:10 the Cougars took the lead for the last time. Brown followed only a couple minutes later by Clark with his 2nd of the night.

Stand-outs for the Cougars were obviously their Vets collecting all 4 goals. Their new faces were also fantastic in a supporting role for the entire game. Newcomer Harkirat Gill was solid on the blue line. Literally getting off a ferry and racing to the arena only an hour prior to game time. AP Ethan Roworth had an assist, Colten Witter blocked several shots that all looked painful, and Davis Frank was outstanding with the puck.

All-in-all the New Look Cougars show a lot of promise. Even with a large portion of the team still vying for a shot at various A teams around the country. 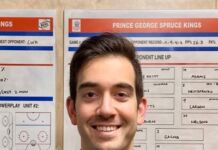 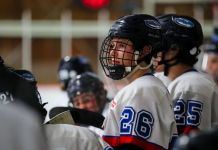