The Clippers’ Wall of Honour will be located in the arena below the 460 Realty VIP Suite which will display plaques of those who are honoured as a member of the Clippers Wall of Honour.

“Matt Irwin played for the Nanaimo Clippers for three full seasons helping contribute to the on and off ice successes of the team. It was clear to me that he should be the first member on the Clippers’ Wall of Honour.” said Nanaimo Clippers’ Owner and President Wes Mussio “He help lead this organization to a first-place finish in the league all three seasons and a Fred Page Cup Championship during the 2006-2007. He was also named Top Defenseman in the BCHL two years in a row.  In addition to all the on-ice success Matt had, he was a major contributor to the community of Nanaimo as someone who would frequently be lending a hand at community events.”

Irwin, who is a Victoria native, was scouted to the Nanaimo Clippers while playing Junior B Hockey in the Vancouver Island Junior Hockey League. Following his three incredible seasons with the Nanaimo Clippers, he spent two years at the University of Massachusetts playing for the UMass Amherst. In 2010, he was named to the All-Academic Team.

Following his time in the NCAA, he spent the next two and a half years in the American Hockey League with the Worcester Sharks, where he was named to the All-Star Game in 2012.

The Nanaimo Clippers Ownership, alongside our Clippers’ Nation, are excited to be welcoming #44, Clippers Captain, Matt Irwin back to Frank Crane Arena on November 13th when he will be the first member of the Clippers’ Wall of Honour. 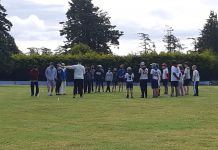 June 15, 2021
The South Island Youth Cricket League kicked off their 2021 season this past weekend with the long-awaited opening match of SIYCL’s new Junior B...