ISN
Home British Columbia Vancouver Island
Share on Facebook
Tweet on Twitter
The Alberni Valley Bulldogs are proud to announce that associate coach & director of player development Brandon Shaw has been named the next head coach of the Coquitlam Express.
Shaw has spent the past two years with the Bulldogs and was promoted to associate coach this year by Joe Martin.
“I’m happy for Brandon, he is a forward thinking coach with whom I’ve had a good history with” said Joe Martin. ” He works very well with young players and has a passion for skill development.”
Tali Campbell the Express General Manager is excited to have Shaw as the next coach of the Express. “We are really excited to be welcoming Brandon to the Express organization as our new head coach. After an in depth search, we went with Brandon for his experience in recruiting, his connections with NCAA schools, and his detailed approach to making a team successful.”
Bulldogs President David Michaud said it’s a bitter-sweet moment to lose a coach of Shaw’s calibre. “Our role is to develop not only players, but staff as well. Brandon has earned the opportunity to guide his own team. He’s spent a number of years working under Joe, and now it’s time to leave the nest so to speak. I’ll miss Shawzy’s work ethic and his desire to make the Bulldogs a better organization.
It’s a reflective time for Shaw after earning his 1st Junior “A” head coaching position.”Port Alberni will always be a special place for me. I’ve met so many great people here and there is no doubt the team has one of the best volunteer groups and fan bases in all of junior hockey.” said Shaw. “The future is extremely exciting for the Bulldogs, I truly believe the group here will be competing for a championship next season. I’d like to thank Joe & David for their mentorship during my time here. With Joe and David, the Bulldogs will always be a premier organization in the BCHL. I can’t thank them enough. I also want to thank the players for their constant work ethic and drive, I would not have had this opportunity without them.”
For Shaw, it’s hard to hide the excitement of having a team of his own to guide. “I am excited for the challenge of being a head coach in the best Jr A league in the Canada. The Express, like the Bulldogs will have a focus on work ethic, family and getting better each and every day. I look forward to competing against the Bulldogs next season in the new Coastal Conference.”
Joe Martin will have an announcement in the coming weeks on Shaw’s replacement as the Bulldogs new assistant coach. 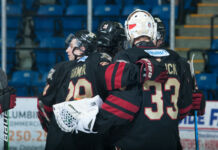 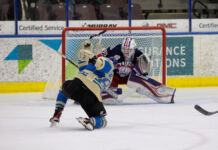