Last week, Parker Kump was complimented with the greasy work, setting a pick which opened space for his teammate to strike for the overtime winner. On Sunday, it was Kump’s turn to be the beneficiary in a first-place showdown. With Kump leading the way, the Sea Spray Lacrosse Club won 16-9 over the Grizzlies Lacrosse Club in week six Arena Lacrosse League West Division action at Langley Events Centre. The victory improved the Sea Spray to 5-1 while the Grizzlies fell to 3-2 as the season hit the midway mark.

Kump scored six times and finished with eight points while Tyler Kirkby had a goal and nine helpers for the 10-point game. “Honestly, the boys were just moving the ball and then Nick Preston was setting hard picks all game so I kept shooting and they kept dropping,” Kump said afterwards, admitting that it was nice to get the monkey off his back following a slow start individually to the season.

Since putting up six points in week one, Kump had managed a combined five points in the next three games. Sunday’s output was also his first multi-goal game of the season.
“I had a good feeling in warm up and we were pretty short up front so knew I had to step up. It kept dropping for me,” Kump said. The Sea Spray scored the first four goals of the game and managed a multi-goal advantage the entire game. The victory avenged the Sea Spray’s only loss of the season, a 14-8 defeat at the hands of the Grizzlies in week three.
“We definitely came into this game with a chip on our shoulder, wanting redemption in the battle for first. Coaches told us to play our game,” Kump said.
The Sea Spray led 9-5 at the half before each team managed just a single goal in the third quarter before they opened the fourth with four of the next five goals to put the game out of reach.

“Right from the first faceoff, we played a very aggressive game defensively, I think our athleticism showed. I think we outplayed them in every facet of the game,” said Sea Spray coach Russ Heard. “Things can change and they can come out next game and do the same to us too (but) right now, we have the bragging rights.” Matteo Tack returned to the line-up and despite playing his first game in nearly a month, was solid with 31 saves on 40 shots.

“He played a great game and showed almost no rust. Our defence played great in front of him and when they weren’t he was there to bail them out. From goaltending on out, everyone was great today,” Heard said.

The Sea Spray outshot the Grizzlies 63-40 and in addition to Kirkby and Kump’s big games, they received four goals from John Hofseth and two goals and two assists from Gordie Phillips. Preston finished with four assists while Zac Christianson, Aidan Ellis and Rob Hofseth each had a goal.The Grizzlies were led by two goals apiece from James Baker and Erik Maas while Andrew Joseph, Jacob Patterson and Steve McKinlay each had a goal and an assist. Kyle Nichols had the other Grizzlies tally. “The effort was definitely there; we had trouble getting a flow to the game … lot of breaks, lot of penalties. It is no excuse because both teams have to play through it. Just our rhythm was off tonight,” said Grizzlies coach Rick Williams. “Guys know what they have to, they just have to tighten it back up.” 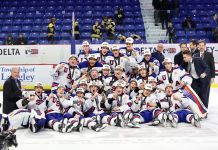 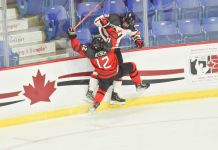 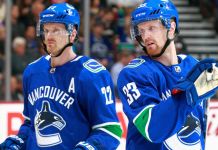