For the second straight day the home teams would score a lopsided win in women’s basketball.

The Royals (7-6) blasted out of the gate on Saturday outscoring the Coyotes 17-7 in the opening frame and never looked back.

Rachel Beauchamp was again the focal point dumping in 18 points and grabbing 11 rebounds. Malena Mokhovikova was big off the bench draining 14 points and pulled down seven boards. Overall they shot 41% from the field on route to their seventh win of the season.

Of the Coyotes (5-7) 54 points, two players combined to score 25 of them. Jenna MacLennan led the way with 13 points and Madelaine Postnikoff finished with 12. Their offence was ice cold from downtown connecting on just two shots of their 22 attempts.

Saturday’s offensive attack by the Blues (8-4) was very balanced as four players scored in double-digits. Reiko Ohama nailed five-three pointers and finished with a game high 22 points. Mackenzie Smith dominated down low with a double-double of 18 points and 13 boards. In all the Blues shot 40% from the field.

The Falcons (4-9) drop their second straight despite a solid road game from Breanne Homeniuk who finished with 17 points off the bench. Stephanie Von Riedemann was the loner starter to score in double-digits with 10 points. 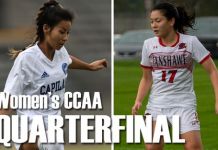