March 31, 2019. Victoria, BC (ISN) – Malik Gagne-Smith would score four touchdowns, including an interception and a stripped ball for a TD, to lead his Junior Bantam Gordon Head Raiders, coached by CFL alumni Alex Carroll,  to a lopsided 44-8 win over the Victoria Spartans Sunday afternoon as the Island Football League finished their opening weekend of the 2019 spring football season at Copley Field.

The minor level Island Football League opened their season with an impressive twenty team roster of players from as far north as Parksville, with 400 + players going head to head in an 11 week, regular game season culminating in Island Champions being crowned.

In earlier action at Copley Field, the Atom division Victoria Spartans took on the Sooke T-Birds in a breakfast match up that saw the larger and more field- savvy Spartans victorious 26-6 with a dominant running game.

ISN photographer Erich Eichhorn was on hand to bring you this photo essay of some of the Sunday morning football action in Saanich. 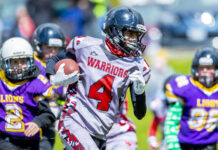 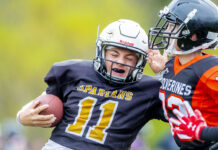