March 16th, 2019   Victoria, BC (ISN) – The Island Football League celebrated the start of another season of Vancouver Island community football with an action filled day preview of this spring’s minor football.

Hosted by the Greater Victoria Minor Football Association, the jamboree, held at Royal Bay Secondary High School, saw teams from as far away as Ladysmith join in on some football fun. Teams from atom, peewee and bantam divisions competed in the preview of what appears  to be a competitive football season for island minor talent.

Here is a small look at some of the action from Royal Bay as seen through the lens of ISN photographer Erich Eichhorn. Enjoy !! 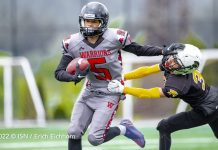